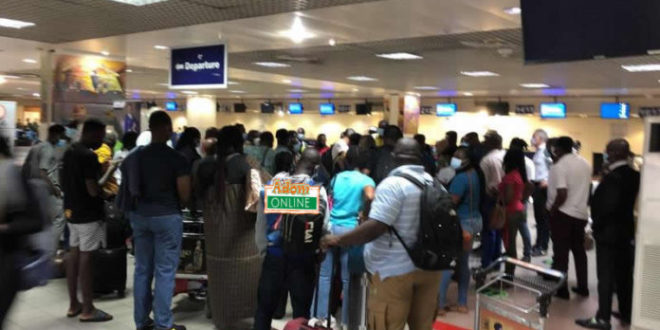 A number of domestic departure passengers are stranded at the Airport following a strike by Kotoka International Airport general staff.

A staff member explained to stranded passengers that unless the strike is called off, they would have to make alternate arrangements.

The Managing Director, Yaw Kwakwa’s office was locked and no member of his secretariat was available.

The Ghana Airport Company Limited’s Divisional Union of the Public Services Workers’ Union of the Trades Union Congress, has directed all general staff of the Kotoka International Airport to withdraw their services from 6:am on Friday, February 26, until further notice.

This, according to the Union, is due to the Company’s Board’s attempt to allegedly shelve the report of an investigative committee which allegedly indicted the Managing Director.

In a press statement dated February 25, the Union said the only way to turn the fortunes of the Company around is when the Managing Director is removed from his post.

Previous U-20 AFCON: Watch highlights of Black Satellites’ victory over Cameroon to reach semis
Next Two battle for their lives after police shoot into rioting crowd