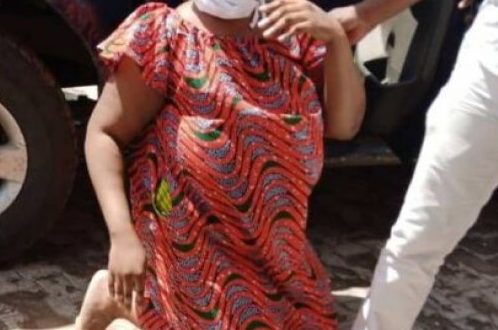 A young and pretty lady of 24 years old, Nancy Yeboah has been sentenced to five years of imprisonment in hard labor for stealing a three-day-old baby in Boadua, by the Asamankese Circuit Court. The accused pleaded guilty to stealing when she appeared before the court, presided over by
His Honour Ababakari Abass Adams.

According to a statement presented by the police prosecutor, Chief Inspector Susan Nyaric, “the complainant, Mohamed Issah, is a farmer who is married to the victim, Kate Nyarkoa lives with the accused, Nancy Yeboah in Boadua and about three months ago, the accused came from Accra to visit her parents at Boadua and claimed that she is pregnant and will stay in Boadu until she delivers.

The prosecutor narrated, that the accused saw the victim, Kate Nyarkoa who was also pregnant and the accused said they are of the same months in pregnancy and vowed to deliver together with the victim.

The accused later informed her mother that she will deliver in the House and began to use a secret telephone number to conversant with the victim with a promise that she (the accused) will take care of her bills when she delivers peacefully and introduced herself as a Samaritan”, the statement stressed.

Additionally, the prosecution explained, that the accused became a close friend to the victim who is mentally unstable through telephone conversation but the victim could not see the friend`s face until birth.

Fortunately, the victim went to St. Dominic Hospital in Akwatia to deliver on 27/04/2021 and she had a baby boy and just a few minutes for her to be discharged, the accused called her and asked her to wait for her to pay her bills and make some donation to her. The accused put on her nose mask and cup and went to the Hospital and introduced herself as the secret friend on phone and asked the victim to take her vehicle key and go to a nearby School to pick some items from the vehicle.

“The accused managed to take the newly born baby boy away and sent him to her room and claimed to the people in her house that she has delivered but a few minutes later, the police together with the victim were searching for the missing baby and came to their house and searched rooms and identified the baby in the accused person`s room is her own”.

Upon further interrogation, the accused confessed to the stealing of the baby and was arrested for prosecution, which came to an end at Asamankese Circuit Court on Monday, May 31, 2021, and was convicted for unlawful stealing.