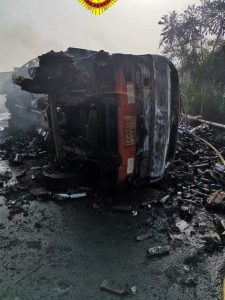 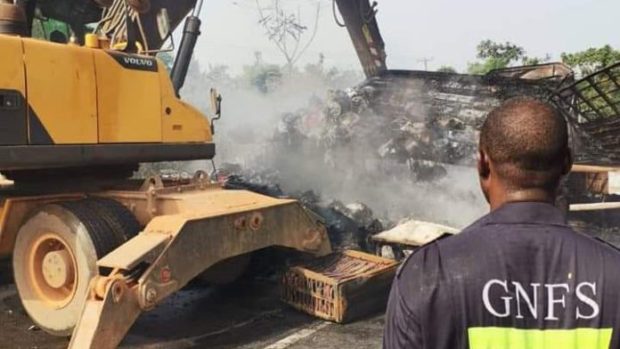 The intervention of the Ghana National Fire Service at the accident and fire scene at Adiewoso on the Agona Nkwanta-Elubo Road in the Tarkwa Nsuaem Municipality of the Western Region saved five persons from perishing.

The five victims, who were critically injured as a result of the accident and the resultant fire, were rescued by the Fire Fighters and sent to the Abura Clinic at Axim for medical treatment. The injured are now stable and out of danger.

Two fire engines were dispatched to the accident and fire scene to contain the situation after receiving a distress call at 0516 hours. It took the daring Firefighters three hours 21 minutes to completely extinguish the resultant ruinous fire that caught the affected Kia Rhino Truck when it heavily crashed on the road.

The unfortunate accident resulted in a fire outbreak destroying its entire consumable contents which run into several thousands of cedis.

The immediate cause of the accident and fire incident is not known. Meanwhile, investigation to unravel the circumstances that led to this near-fatal accident has commenced.