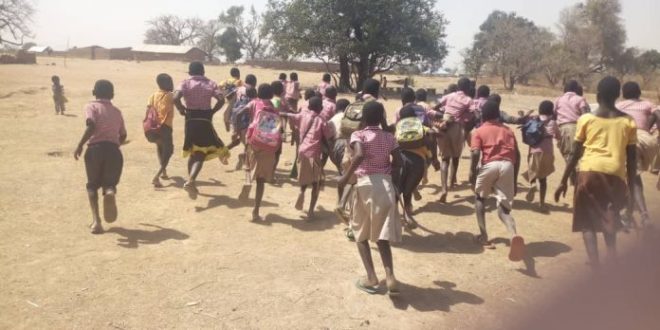 A basic school in Bongo, a district in the Upper East region, is in distress as over 200 schoolchildren without classrooms are said to be exposed to serial attacks from angered bees.

Concerned natives of Goo, the community where the public school is found, say political parties often make good use of the premises of the deprived school as a strategic venue for campaign rallies but no one cares about the dilemma of the unsheltered pupils when elections are over.

The school— Goo-Atandaa KG/Primary School— is bordered by groves where the bees are said to have a colony. The pupils take shelter behind the surrounding rocks and some nearby structures whenever the stinging insects appear in a swarm at the school.

“Because the school is an open area, we experience bee disturbances. I remember some time ago, I don’t know what happened, the bees just spread to the school. It was serious. We had to push some of the children to the nearby house to prevent the hovering bees from harming them.

“Whenever it happens, the children can’t go back to the school and learn. That ends the day. It’s unfortunate that we don’t have classrooms. That is why these bees have access to disturb the kids,” said Pascal Ayamga, a teacher credited with establishing the school in 2002— 17 years ago.

When the Trees Shed their Leaves

On the school’s compound is a structure owned by a church. It is inside that worship house four classes— from the kindergarten to the lower-primary level— do have their lessons.

When Starr News entered the improvised classroom block, teachers were busy inside, each one standing by their separate chalkboards and sweating in front of their chequer-uniformed pupils. The overcrowded hall was not partitioned with plywood at least; so, every child could see what was going on in the other class.

The overwhelming distraction and the hopeless disarray observed inside the mixed hall could make some teachers doubt their calling. And as the floor in the borrowed church building was not cemented and the pupils sat throughout on the bare ground for lack of furniture, the soil-stained schoolchildren bore a perfect resemblance to some small-scale miners returning from a goldmine after a very busy day.

The pupils at the upper-primary level have their classes outside that structure. They sit under separate trees as their classrooms. The branches serve as cupboards to keep teaching and learning resources during school hours and the pointed outgrowths on the stems of the trees serve as shelves or racks for the children to hang their schoolbags. In the wet season, the exposed pupils are unable to learn much as heavy rains, foreshadowed by strong winds, continually disrupt lessons. And there is nowhere else to turn but home when the sun begins to burn at unrestrained degrees after the trees (their makeshift classrooms) have shed their leaves in the dry season and the shade is gone.

“We don’t feel comfortable,” said Gladys Akuure, a primary-five pupil. “We cannot fully concentrate under a tree when our teacher is teaching and something is happening around at the same time. Sometimes, winds throw dust at us and they blow our books away from our benches.”

We are Aware but Assembly does not have Money now— DCE

Speaking to Starr News Monday (today), the District Chief Executive (DCE) of Bongo, Peter Ayinbisa Ayamga, said the assembly was aware of the infrastructure deficit at the school but had no “money now” to meet their needs.

“We are aware of it but we don’t have money now to be able to put up any classroom for them. In the course of this year, GETFund will be giving us some projects. If we get, we can put up at least a 6-unit classroom block for them,” the DCE stated.

Meanwhile, the Assemblyman for Goo Electoral Area, George Akolbire, is passionately appealing to benevolent individuals and aid agencies to lend a helping hand to the school.

“It’s very bad. Especially in the rainy season— there is nowhere to sit. If they assemble all of them (the pupils) inside the church, they can’t learn. Dry season, too, nowhere to sit. Furniture is lacking. As you can see, they are using the benches meant for the church and they are sitting under trees to learn. Some have only benches; no tables to put their books on. Others don’t even have any furniture at all. They sit on the ground. They are suffering.

“There is also a water problem in the school. The children fetch drinking water from faraway. At times, it takes a teacher to go and bring the children back from where they’ve gone to fetch water. A contractor started one borehole at the school some time ago, but for a long time now the work has stalled. I’m just appealing to individuals and organisations for support on behalf of these poor schoolchildren. They are suffering,” the Assemblyman begged profusely.