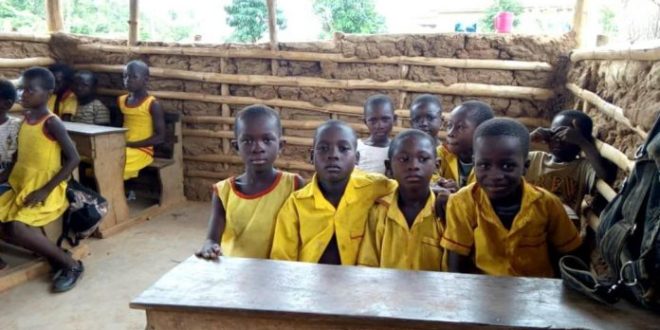 Four pupils use one desk at Dampong African Faith Primary School in the Asante Akyem South Municipality of the Ashanti Region.

The plight of pupils in kindergarten one is worse as they are compelled to sit on the floor to learn because there are no desks.

The School Management Committee chairman, Mr James Nkansah in an interview with Adom News appealed to the government, civil society organisations and individuals to come to the aid of the school.

According to him, the classrooms are inadequate to contain the increasing school population.

Mr Nkansah also complained bitterly about lack of furniture in the school which affects the concentration level of the pupils during lessons.

“The building is not good, the chairs for the pupils too are not good, the toilet facility for the teachers is not good, so we are appealing to individuals and the government to come to our aid,” Mr Nkansah appealed.

He added that due to the deplorable state of the school some parents do not allow their wards to attend the school. Also, academic work comes to a halt whenever it rains.

Juliana Atonso, a kindergarten one teacher described the plight of the school as pathetic and also called for help from well-meaning Ghanaians.

Adom News also spoke to the assembly member for the Dampong Electoral Area, Mr Albert Oduro, who expressed deep worry about the plight of the school and urged Ghanaians to come to their aid.

Some of the pupils who spoke to Adom News said their friends from other schools always laugh at them because their school is in tatters.