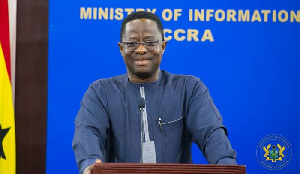 Peter Amewu is a ‘goro boy’ for Aker Energy – NDC

He made the claim while addressing participants at the National Democratic Congress’s dialogue series on the energy sector of the country.

According to Jinapor the Akufo-Addo-led administration has consistently claimed the renegotiated agreement reduced Ghana’s interests from 43 percent to 18 percent.

“The Minister (Peter Amewu) was given six months to renegotiate and increase our stake. To our surprise, he had not only refused to increase our stake he had further granted concessions. One of the concessions was that if Aker had a problem with securing licenses like environmental permits, our Minister is compelled to take that up, pursue that and get them all the options and permits that they need”.

“So, in effect, what our Minister of Energy is being turned into, is a “goro” boy for Aker to go round doing their bids,” Mr. Jinapor said.

In 2019, the flagbearer of the National Democratic Congress (NDC), John Mahama, called for full disclosure on the government’s role in the energy deal.

IMANI Africa also claimed that the country could be short-changed by some 30 billion dollars if the contractual agreements are not reviewed; a claim that the NPP has denied.