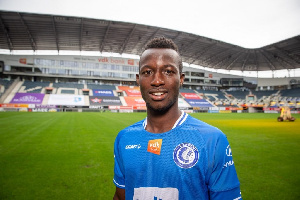 Every weekend your European football specialist Herbert Boakye Yiadom brings to you a comprehensive report on how Ghanaian players performed abroad in their respective leagues as football restarts amid the coronavirus pandemic.

Below is a comprehensive report on the performance of players abroad

In the Premier League, Tariq Lamptey was red-carded in Brighton’s game against Aston Villa

Mohammed Salisu was not included in the matchday squad for Southampton

In the Championship, Andre Ayew missed Swansea City 1-0 win over Rotherham due to injury

In the La Liga, Joseph Aidoo played 41 minutes for Celta Vigo in their 4-2 defeat to Sevilla

In the Segunda division, Samuel Obeng climbed off the bench to play 12 minutes for R.Oviedo in their 1-1 draw against Fuenlabrada

In the Serie A, Emmanuel Gyasi played the full throttle for Spezia in as they drew against Atalanta

Abdallah Basit was on the bench for Benevento

In the Serie B, Kevin-Prince Boateng saw 76 minutes of action for Monza in their 1-1draw against Pordenone

In the Bundesliga II, Christopher Adjei-Antwi saw 88 minutes of action for Paderborn in their 2-0 win over St.Pauli

In the Ligue 1, Majeed Waris and Aleksander Djiku missed Strasbourg’s game against Montpellier

In the Ligue 2, Ebenezer Assifiuah lasted the entire duration for Pau FC in their 2-0 defeat to Grenoble

In the Jupiler League, Eric Ocansey played 88 minutes for Kortrijk in their 1-0 defeat to Club Brugge

Samuel Asamoah played 80 minutes for St. Truiden in their 2-1 defeat to Genk

In the First Division, Emmanuel Toku played 90 minutes for Fremad Amager as the lost to Koge by a lone goal

David Martin was on the bench for Fremad Amager

Lawrence Ati-Zigi featured for St.Gallen in their 2-2 draw against Lausanne

In the MLS, Harrison Afful, Jonathan Mensah featured in the game for Columbus Crew as they recorded a 3-2 win over New York Red Bulls

Samuel Tetteh was on the bench for New York Red Bulls

Emmanuel Boateng warmed the bench in that game for Columbus Crew

Previous US election 2020: Trump ally urges him to accept defeat in US vote
Next Akuffo Addo  is crushing the Economy, kick him out – Richard Fred Kwashie