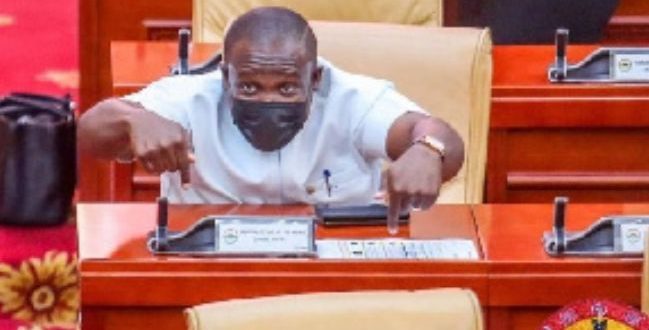 The Member of Parliament for Ningo-Prampram, Sam Nartey George, has expressed great worry over the unprofessionalism, lack of basic comprehension abilities, and the porous recruitment system in the Ghana Police Service.

He also claimed that even worrying is the fact that there are people who have criminal records who have been recruited into the Ghana Police Service, a situation he said puts this country in great danger.

“You’re actually have people who have done time in Nsawam; we have evidence of people who have actually been involved in criminal activities, people who’ve been arrested by the police before, today being recruited into the police service. Right now, at night, when you’re driving and I see a police checkpoint, I’m even scared to stand,” he said.

Sam Nartey George was responding to a recent statement from the service that indicates updates on investigations carried out into a number of attacks that have been made on bullion vans in the Greater Accra.

According to a police release, some two policemen had been identified to have been involved in the attacks, although the statement failed to mention the names of the men.

Commenting on the shocking findings from the preliminary investigations by the police, the MP said that the service riddled with people who cannot even spell their own names, it compounds the situation even further.

“There are people in police (sic) who can’t even spell their names, can’t write a proper sentence. You only need to have a problem and go to a police station and go and talk to any of the fresh recruits. Many of them cannot string three sentences in English. They end up speaking Twi to you or speaking in vernacular,” he said.

Speaking on Tuesday, March 8, 2022, edition of Good Morning Ghana on Metro TV, and monitored by GhanaWeb, he added that he will campaign for a new NDC government to clean up the service when it regains power.

“We have destroyed the image of the police service and that’s why I maintain my call that the next NDC administration under President Mahama, whoever will be Minister of Interior and Minister of Defense, has the arduous task of cleaning up our security services: a proper audit of recruitments that have been done,” he said.

He also claimed that there have even been soldiers assigned to the presidency who have been involved in criminal activities before.

“We’ve seen soldiers who have been assigned to the office of the president engaged in armed robbery: soldiers, National Security operatives being arrested for armed robbery. I mean, where have we gotten to if men and women who are supposed to wear the uniform with the insignia and protect the populace are the ones engaged in these kinds of activities.

“The Adademkpo incident, when it happened, I sat on this show and I said it takes a professional to have been able to carry out that hit because the bullion van at Adademkpo, the Jamestown one, was in motion. The reports from eyewitnesses was the people who carried out the robbery were on a motorbike, moving,” he added.

Sam Nartey George wasn’t however surprised at the outcomes of the investigations, as shared by the Ghana Police Service, and he explained why.

“For you to be able to take a head-shot, shoot at someone and hit him in the head, not the body: you need to be spot on as a marksman to hit the head of a target standing, how much more a target in a moving vehicle when you’re also moving? You need to be properly trained? That day, I didn’t know who it was but I said they were people with experience and proper training.

“If today we’re being told that policemen from a specialized unit I’m sure, because I’ve heard that audio, are the ones doing this, they are the ones who are given those kinds of training. What kind of security background checks did we carry out before recruiting these people?” he explained.

The earlier statement from the police said that investigations were still ongoing and that the public would be duly updated when the time is right.

Previous Ghana’s 65th Independence Day on Twitter: The hashtags, messages & wishes
Next Did an increase in the cost of Akufo-Addo’s favourite private jet lead him to fly commercial?