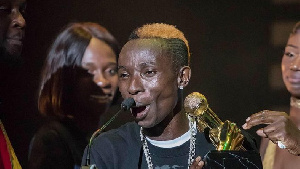 Budding artiste, Patapaa, has expressed disappointment in colleague Shatta Wale over what he said is a degrading comment about his craft.

Shatta Wale, reacting to rapper Yaa Pono’s planned beef which he shut out, said beefs are now meant for underground artistes like Patapaa.

The comment has touched a spot of sadness in Patapaa who is doing his possible best to connect Ghana artistically to the rest of the world.

“This is a No No No”, according to Patapaa, especially coming from an artiste he said he reveres to the extent of tagging him his Godfather.

The One Corner hitmaker lamented that from the day he introduced his music, he has been undermined and underrated by both senior and junior colleagues.

But, he is confident the tables will turn eventually and he will grow to become his slanderers’ hero since he serves a living God, coupled with his focus.

His heartbreaking reply has touched his fans who have comforted and applauded him for his maturity.