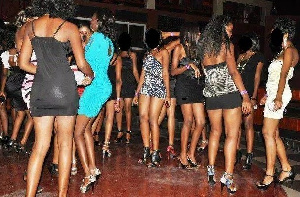 The Chief Fisherman of the Sekondi Fishing Harbour, Nana Kofi Essoun, has said that over 900 commercial sex workers from Nigeria have erected sheds in and around the Sekondi harbour to ply their trade.

This, he said, has made the community which hosts the harbour, European Town, very unsafe for its residents, 3news.com reports.

Kofi Essoun added that crime has become very rampant in the community with innocent people being attacked almost on a daily basis.

“The harbour is now not safe. As I speak with you now, we have over 900 commercial sex workers from Nigeria who have erected sheds for their trade. They engage in various activities endangering the peace we have been enjoying at the harbor.

“Just yesterday, one young man known as Yeboah was killed in the area. They claim he was a thief. We got there and realized they had killed an innocent man. I have spoken with his family members and the police are investigating the case,” he is quoted to have said by 3news.com

Kofi Essoun said that the regional minister and the Western Regional Coordinating Council have failed to act despite several reports to them.

He added that if the council fails to address the matter, he himself will soon organise the community member to destroy all the sheds that have been put up by the prostitutes.

“The regional coordinating council headed by the regional minister has refused to act but we will not sit aloof for things to get out of hand. I will make sure their structures are demolished soon,” he said.