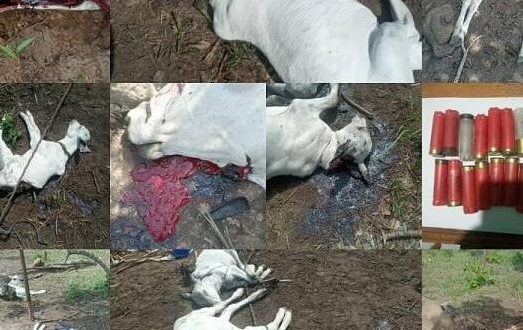 More than 100 cattle and calves worth about GHC 500,000 belonging to different individuals have been shot and killed by unknown persons between two farming communities namely Komendaa and Hindu in the Kintampo South District of the Bono East Region.

The animals are kept at their local ranch located between the two farming communities; a parcel of land acquired by the cattle owners from the custodians of the land for the purposes of keeping the animals away from causing harm to any farmland.

It is however unclear whether the animals crossed their boundaries and got into people’s farms to destroy crops, but, per where the animals were shot, no farm was closer and according to the herdsmen, no farmer had before the incident lodged a complaint of a cattle or calf destroying crops in a farm.

The affected Fulani herdsmen and cattle owners are therefore demanding a police investigation into the killings which they described as spontaneous.

Speaking in an exclusive interview with this portal, the spokesperson of the herdsmen, Musah Ali said, the ranch was legally acquired by the cattle owners and they have been living peacefully with all the members of the two communities.

“We just can’t tell what provoke the attack and that massacre on the animals, but as law abiding people, we are not ready to retaliate hoping that the Police will bring the perpetrators to book”, said the Spokesperson.

The Kintampo Divisional Police Commander, ACP Francis Annor, who confirmed the incident at a press conference on Thursday March 31st, 2021, said, investigations have started, but they are yet to make any arrest

He said, the entire residents of the two communities have fled but the Police are working hard to arrest the perpetrators to face the full rigours of the law.

“But we have invited the opinion leaders of the communities involved because we are certain that, it was a communal attack on the animals. We didn’t see any farm closer to where the cattle were killed but our investigations will help unravel the truth”, he assured.

At the scene, the Police picked empty containers of local gun bullets as well as some live ammunitions.

Meanwhile, the Director of Jaksally Development Organisation, a non-governmental organization that is into employment and wealth creation, Mr Seidu Jeremiah, is advocating for a community facilitation programme to prevent future bloodshed in the area.

He said, through the facilitation programme, farmers and cattle owners including herdsmen would be able to agree through dialogue to stop the spiraling farmer-herder violence in the area.

Previous Watch Highlights: Hearts of Oak beat Aduana Stars 2-0 to move third on the league table
Next VIDEO: Your husbands won’t come back to you again after our styles – SHS girls brags