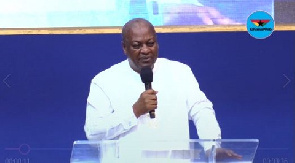 Mr Mahama expressed shock about why the Osu castle which until 2013 was the seat of government could be used for training of militias.

“Watched a harrowing expose of how the Osu Castle, until 2013 the office ofthe President, now used as an Annex, has become the HQ & training camp of a private militia wing of the NPP & @NAkufoAddo. Clearly, this admin has produced enough paint to paint the whole nation black.” Mr Mahama posted on twitter.

Yesterday, Joy News aired the documentary at 8:30 pm and it was widely speculated that high-powered government delegation was engaging the station to compel them not to air the piece. It went ahead.

Earlier, Joy News said that the militia group associated with the governing NPP is being trained at an important state facility classified as a security zone. We now know it is the Osu Castle.

From the website of the group, de-eyegroup.com, here is what we gleaned about their services:

“Our men can also be deployed to guard important government installations and industrial units across the Nation. DE-EYE Group is a Company which is committed to planning and deploying security best practices. We also give advisory services to governmental agencies, NGO’s, international organizations and individuals.” the website de-eyegroup.com said.