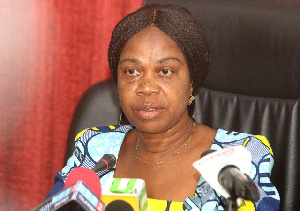 The fourth prosecution witness in the ongoing trial of former COCOBOD CEO and two others was found wanting after it emerged that she issued different fertilizer certificates to Sidalco without recourse to an Act of parliament regulating how her office is administered.

The witness, Dr. Felicia Ansah-Amprofi, who is the National Director of the Plant Protection and Regulatory Services Directorate (PPRSD), although told the court she was well versed in the laws governing the department, was cited for arbitrarily extending the expiring dates for three different products of Sidalco contrary to what is stipulated in law.

She had earlier told the court that the duration of the registration in respect of all fertilizer products is two years and can be renewed for further two years.

“You also told the court the duration of the product in respect of all fertiliser product is two years. Am I correct?” Mr. Nutifafa Nutsukpui, stand-in lead counsel for Seidu Agongo who is the CEO of Agricult Ghana Limited, asked the witness.

“Now is there any exception made to that duration by either Act 803 or L.I. 2194,” the lawyer further asked?

In her response, she was emphatic that “by the Act and its regulations there is no exception”.

She was however confronted with registration certificates issued to Sidalco in her capacity as the fertilizer administrator between 2010 and 2014 with a three-year expiration date.

Find excerpts of what transpired in court on October 13 below.

Q. Please tell the honourable court the name found on the Exhibit K10?

Q. Please what are the names of the compounds identified in exhibit K10?

Q. In what concentrations

Q. Kindly tell the honourable court who is stated as the fertiliser administrator in Exhibit K10?

A. The fertilizer administrator as I stated at earlier time was myself Felicia Ansah-Amprofi

Q. Madam what is the date of registration as stated in Exhibit K10

Q. And how about expiry

Q. Madam, Act 803 came into force before the issuance of the certificate

Q. And madam, according to you, the duration of every fertiliser product registration is two years,

Q. Please go to Exhibit K12, it is also a fertilizer product registration certificate. That is true

Q. And Exhibit k12 is another Sidalco liquid fertiliser

Q. It has compounds similar to the ones found in Exhibit K10. That is correct?

A. That is correct

Q. What is the concentration of this product

Q. what is the date of registration on Exhibit k12?

Q. Please how about expiry date of registration

Q. Madam, that is also for a period of three years and not two

Q. Please take a look at Exhibit k14. This is another fertiliser product registration certificate, that is true

Q. And again it is another Sidalco liquid fertiliser that is covered by Exhibit k14?

Q. What is the concentration of the compounds in Exhibit K14

Q. Once again that is three years and not two years

Q. In respect of Exhibits k10, K12, and K14, you were the fertiliser administrator

Q. And even though , according to you, Act 803 as well as L.I. 2194 do not make any exceptions to the duration to such registrations PFRD granted Exhibits K10, K12, and K14 anyway. That is correct?

A. very correct. What is on the certificate is what he has narrated. And as we said earlier on, the Act was enacted in 2010, before then products were not being registered. So when the Act came out and the applicants started registration, concerns were raised about the fees and charges, so the charge for a product has since been GHc3000. The concern was it was too expensive so at that time a committee was set up by the PPRSD to look into the fees and charges [which is a preserve of parliament], so the recommendation was the fees cannot be changed until the fees are reviewed in future by the Legislative Committee (of Parliament) on fees and charges. So the PPRSD Committee recommended that if the fees could not be changed, being the first time the applicants are registering, should be extended for 3 years instead of 2. And the committee set up by the PPRSD accepted to extend all new registrants registration for 3 years.

Q. And in fact section 72 (1)(b), which states categorically that every registration for the first instance shall be for two years also came into effect before you granted Exhibits K10, K12, and K14, that is correct.

Q. And that provision has never been amended, that is also correct

A. It is correct

Q. Madam, I put it to you, neither you nor committee of experts or howsoever described had the authority to override the specific provisions of Act 803?

A. I also wish to answer by saying the law gives provision for applicant to put any case for consideration and this can be addressed by the committee. So it is not cast in concrete and stone. So applicants who have concerns can put their case across to be addressed and you can find that in Section 73.

Q. Madam, I put it to you finally that this bit about extension of the registration period is a complete afterthought and bears no relationship with the truth.

A. Is never true.

Meanwhile, according to Section 73 of Act 803, referred to by Dr. Ansah-Amprofi, it is only the sector minister which is clothed with the power and “may by notice in writing suspend, cancel or modify a registration”, suggesting that the decision by the PPRSD committee was at variance with the law.

They have pleaded not guilty to all the charges and are on self-recognition bail of ¢300,000 each.