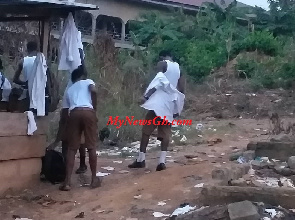 Students of the Opoku Ware School (OWASS), one of the premier second cycle institutions in the Ashanti Region are currently engaged in serious open defecation over lack of and inaccessibility of toilet facilities in the school after numerous cries for help went unheeded, a joint Pure 95.7 FM and MyNewsGh.com investigation has uncovered.

As a result of this, the children are exposed to various filth-related diseases in addition to the indiscriminate disposal of waste within the precincts of the institution.

This unhealthy practice which stares authorities in the face has also seen the students openly defecating in the school without anyone being able to do anything about the situation.

Because the school lacks a toilet facility and for fear by the students of contracting diseases in the locally constructed place of convenience mostly used in remote areas referred to as ‘wheeeetim’, the students themselves go around to look out for areas around the school where they can relieve themselves and inform their colleagues. When such an area is ‘full’ after use, they search for another area to visit when nature calls.

Investigations conducted by Kumasi-based Pure FM in collaboration with MyNewsGh.com revealed that temporal structure used as toilet facility close to the teachers’ bungalows has been very weak for over six years now and risks caving in, for which reason students fear to venture close.

Students of the school who spoke on grounds of strict anonymity revealed that the structure is weak and for fear of a disaster have resorted to defecating in the open indicating that several appeals to authorities’ resolve the issue has proven futile.

They explained that they have no choice but resort to open defecation for the sake of their own safety despite the fact the practice is producing a horrible smell which has some health implications on them.

“They have also locked the WC toilet facilities and we are yet to know the reason why authorities have taken such a decision”, they revealed

Opoku Ware School which has produced influential person inGhana including leading political figures from both the National DemocraticCongress (NDC) and New Patriotic Party (NPP) was established in 1952, as one of the five Catholic schools in Ghana that year.

Opoku Ware School, often referred to as OWASS, is an all-boys high school in Santasi, a suburb of Kumasi.

Meanwhile, Old Boys of the school have promised to construct an 18-seater toilet facility to replace the dilapidated structure which poses a major threat to the lives and health of the thousands of students.

Authorities of the school declined comments when reached by MyNewsGh.com with calls from the Alma mater for the headmaster to be fired for supervising over an ineffective administration.