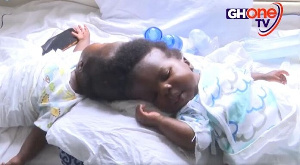 Information reaching Starr FM and GHOne TV indicates that one of the conjoined twins whose surgery was done at the Greater Accra Regional Hospital at Ridge has died.

Information from sources close to the family of the twins indicates the baby died on the night of Thursday 1st December 2022 when the surgeons were conducting the last stage of the surgery to separate the two boys joined in the head.

The marathon surgery to separate the conjoined twins began on Monday 6th December 2021 at the Greater Accra Regional Hospital.

The boy is said to have died just when the surgery started.

The government took up the full cost for the surgery to separate the twins after the EIB Network began a public campaign to raise funds to support the surgery.

The campaign, which was led by the General Manager of the English Cluster of the media conglomerate, Nana Aba Anamoah, had already raised over GHC500,000.

Surgeons at the Ridge Hospital had said it will cost a whopping GHC3,000,000 to separate the twins who are joined in the head to enable them to live independently.

This was the first time doctors in Ghana conducted such a specialized operation.