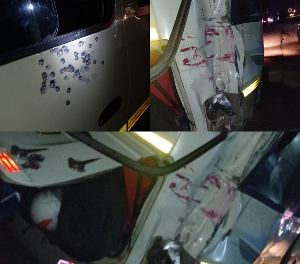 Armed Robbers have attacked Women’s Premier League side, FC Savannah, on the Tamale-Kumasi Highway on April 8, 2022.

The club via their Twitter handle confirmed the news, announcing that one of their officials has sustained an injury as a result of the ambush that occurred during the late hours of Friday.

They also stated that the robbers made away with monies and valuable items of the players and officials in the vehicle.

However, all persons on board are fine aside from the injured official and the team continued their journey to Kumasi to honour their match week 14 game against Dreamz Ladies FC.

“Thanks to Allah, the team has arrived safely in Kumasi. All players are fine but one official sustained injuries. Meanwhile, the robbers made away with monies of the persons on board,” the Club tweeted.

Following the news, the Ghana Football Association(GFA) have released a statement that they will engage with Ghana Police to provide adequate security to traveling clubs.

The GFA’s statement on April 9, 2022, reads: “The Ghana Football Association (GFA) received with shock news of the unfortunate armed robbery attack on the team bus of FC Savannah Ladies.

“The team’s bus on its way Tamale to Kumasi for the Women’s Premier League Matchweek 14 match against Dreamz Ladies FC at the Bantama Astro pitch on Saturday.

“Though we are pleased with news that players and technical staff are currently safe, we call on Security authorities to beef up security on our highways to avoid such incidents.

“We also wish the injured club Physiotherapist a speedy recovery.

“Traveling clubs are hereby advised to avoid night travels, and where required engage the security services or seek security advice before making trips.

“The GFA will further engage the Ghana Police Service on providing adequate security support to teams when they travel across the country.

“The GFA will continue to provide the needed support to FC Savannah with regard to this matter.”