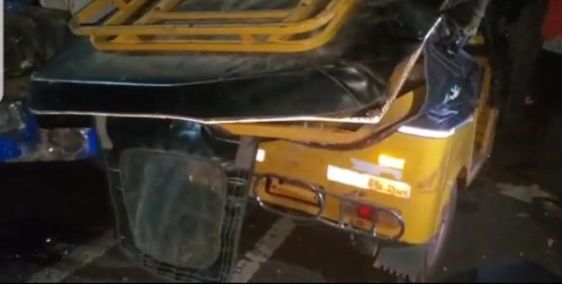 One in critical condition as trailer crashes ‘pragya’

Share
A tricycle (pragya) driver is in critical condition after a collision with a trailer on the Nkwanta road.

The trailer, with a foreign registration number, 6759 AM, is said to be conveying a container from Accra to the Northern part of Ghana, when the crash occurred.

Eyewitnesses account indicated that the victim, believed to be in his early twenties, rammed into the trailer after veering off his road.

Due to the small nature of the tricycle, it ended up under the trailer, and being ridden upon.

The pragya driver sustained major injuries while his tricycle was damaged beyond repairs.

The front part of the trailer was also damaged. No casualty was recorded from that side.

The Ghana National Fire Service salvaged the situation ad transported the victim to the St.Josph’s Catholic Hospital at Nkwanta for treatment.