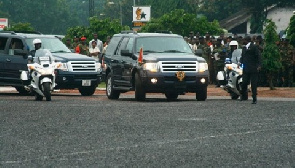 One person has been confirmed dead after the convoy of the Vice President, Dr Mahamudu Bawumia was involved in accident at Asemasa near Beposo on Saturday 16th February 2019.

MyNewsGh.com gathered that the deceased person is an urvan driver who was also involved in the accident which occurred at about 6:30 pm on the Takoradi – Cape Coast highway as the Vice President was returning from some activities in the Western Region.

A statement from the signed by the Spokesperson of the Vice President Dr. Gideon Boako confirming the unfortunate development reads “ Vice President safe after Road Accident. Vice President Dr Mahamudu Bawumia escaped unhurt in an motor accident On Saturday, 16th February, 2019. The incident occurred around 6:30pm on the Takoradi – Cape Coast highway as he returned from some activities in the western region.

The driver of a commercial vehicle which was also involved in the accident unfortunately, however passed on. Some other passengers and security persons who were injured were conveyed to the Cape Coast Regional hospital and are responding to treatment. Vice President Bawumia’s thoughts and prayers are with the injured and the family of the deceased”

Previous Bawumia’s convoy involved in an accident; one dead
Next Three feared dead in car crash at Potsin Junction