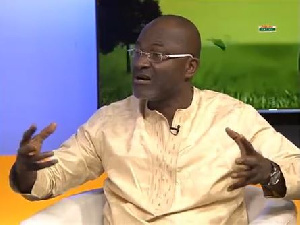 There has been a heated debate on the need for a new voters’ register in Ghana with some parties opposing and others supporting the idea for the past few months.

Some Civil Society Organisations (CSOs) and some political parties have rejected the Electoral Commission’s (EC) proposal to compile a new electoral roll ahead of the 2020 presidential and parliamentary elections. Whilst members of the ruling New Patriotic Party (NPP) and others have also supported the idea.

Speaking on the need to compile the new voters’ register in an interview on Happy98.9FM’s ‘Epa Hoa Daben’ was Member of Parliament (MP) for Assin Central Constituency, Kennedy Agyapong.

The Politician motioned that the National Democratic Congress (NDC) has rigged the old voters’ register to favour them hence, the need for a new one.

“The NDC and vendor, Superlock Technologies Limited (STL) have put in place a system where the party effortlessly polls 1.5million votes even prior to the elections”, he said.

According to him, the STL is made up of thieves and that is a reason the President Nana Addo Dankwa Akufo- Addo won the 2016 elections by a low margin.

He went on to attribute the opposition NDC’s fight against the new voters’ register as an acknowledgement of the loss they will make if it comes to be.

But the MP promised, “We will change the register no matter what”.

The EC was set to compile a new voters register prior to the Government of Ghana’s decision to close all of the country’s borders and impose restrictions on public gatherings and movement in response to the Coronavirus outbreak.

Two weeks after President Akufo-Addo imposed a ban on all public gatherings and announced other “social distancing” directives in an effort to stem the spread of the novel Coronavirus, the EC announced that it was postponing the registration exercise indefinitely.