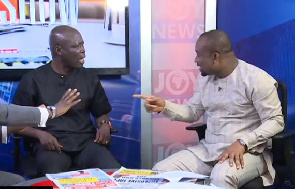 YEN.com.gh has sighted a video of the Nii Lante and Pius hurling insults at each other during a live political programme on Joy News TV.

In the video, the discussion on the table was about the NDC chairman Samuel Ofosu-Ampofo’s leaked tape which he spoke about the formation of a ballot box protection unit.

However, the host of the show, Kojo Yankson, said all vigilante groups must be disbanded citing an earlier interview Ofosu-Ampofo granted which he supported that idea.

Nii Lante, in answering the host asked whether a ballot box protection unit is a militia group, but Pius, who was seated next to the lawmaker answered sarcastically by saying it is a church.

Nii Lante then got infuriated and he hurled insults at Pius which the latter replied.

The two continued trading insults as they nearly displayed their punching skills on live TV.

Pius quizzed Nii Lante whether the ballot protection unit is a prayer camp but he replied saying it is his ‘father’s house.’

The host then jumped in to calm their nerves and condemned their actions.