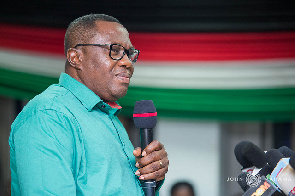 The National Chairman of National Democratic Congress (NDC), Samuel Ofosu Ampofo has been granted bail after being interrogated by the police over a controversial leaked recording.

Mr. Ofosu Ampofo has been at the CID head office for about 10 hours.
He was met by scores of jubilant NDC supporters who had massed up outside the police headquarters to press for his release.

Mr. Ofosu Ampofo addressed the crowd where he assured that “the NDC Chairman is a man of peace.”

He also commended the police for who he said “have handled the thing professionally.”

“We believe that anytime the police in such a situation, you can be sure that the will do a very professional job.”

In addition, with the controversy surrounding the leaked recording, he assured that the NDC “will not undermine the peace and stability of this country.”

Mr. Ofosu Ampofo was invited after being heard in a leaked audio recording outlining plans to match up against groups from the governing New Patriotic Party ahead of the 2020 elections.

The NDC chairman said his approach to the election was going to be different and said there were plans for “covert and overt operations.”

Prof. Asante has come out to say does not hold any grudge against Mr. Ofosu Ampofo for his purported utterances.

“That’s not going to stop the Peace Council from doing its work. My conscience is clear; I will do what is expected of me. I will be neutral. We’ve done it in the past and we will continue doing what we have to do. I’ve already forgiven who ever said that. If he [Samuel Ofosu Ampofo] said that I’ve forgiven him. If it’s not him, I still have forgiven whoever made those words.”

The NDC’s first response was to say its offices have been bugged following the circulation of recordings and accused the government of engaging in illegal espionage.

The National Communications Officer of the NDC, Sammy Gyamfi said: “we know the government is engaged in illegal espionage activities in this country; employing state resources and the national security apparatus to spy on political opponents.”

Former President John Mahama had first yesterday called sympathizers and members of the party to disregard the leaked tape with contempt.

“Our opponents are good at propaganda and they will come up from time to time with things to distract us. This issue of a [leaked] tape is just a distraction. Dismiss it with the contempt it deserves. Let us focus. Our message must be to the Ghanaian people,” he said.

But most recently, he was claiming the party’s chairman did not incite violence towards the Peace Council Chair in the recording.

Speaking at the Perez Chapel in Accra on Sunday, Mr Mahama said the NDC was only unhappy that the Peace Council Chair, condemned comments made by him in the wake of the Ayawaso West Wuogon by-election violence “without condemning the violence. That was our problem.”

“If you condemned the violence and then you commented on what the former President said, that would be acceptable. So in the circumstances, for our chairman who had witnessed the violence… anybody who saw that will be traumatized. And so if a few days after he was talking and saying we should attack the Peace Council Chairman, he didn’t mean we should go and beat the Peace Council Chairman, he meant we should criticize him.”