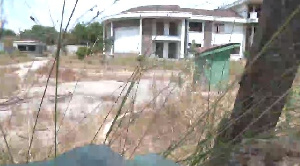 Official residence of Vice President not completed after 4 years; weeds take over compound

A new mansion under construction to house Ghana’s Vice Presidents has for the past four years, been left uncompleted.

The contract for the building which is located on the SwitchBack Road in Accra was awarded and started under the erstwhile John Mahama-led administration.

The decision to construct a new residence for Ghana’s Vice Presidents came after former President Mahama decided to reside in the previous official Vice President’s residence after he was elected president.

Current Vice President, Dr Mahamudu Bawumia, upon assumption of office in January 2017, revealed that the previous NDC administration had planned to spend $13.9 million to construct the official residence.

The NDC, however, denied the allegation claiming only $5.9 million was budgeted for the house.

In a “Meet The Press” encounter in July 2017, Dr Bawumia, responding to a question on the status of the building, indicated that work had stalled but the best option for the Government was to renegotiate the contract, finish the building and put it to use since it is a national asset.

But very little or no news has emerged from this controversial building since then.

Nana Yaw Adwenpa, Host of the CTV Morning Show, Dwabremu, who took a tour of the site of the construction to find out the extent of work done on the building reported that the building looks abandoned.

He said the compound is overgrown with trees, weed, grass, and shrubs competing for space to survive on prime land.

He added that the building has not seen any form of improvement.

The CTV Dwabremu team, Nana Yaw Adwenpa noted will keep tabs on the building and keep the public updated.