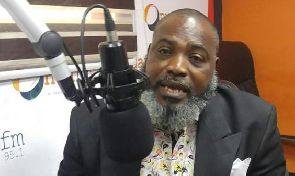 An Insurance Marketer, Edgar Wiredu, has criticized the President Nana Akufo-Addo for re-opening gold mines at Obuasi in the Ashanti Region.

He made this comment on Pan African Television’s Good Morning Africa.

The Insurance Marketer, who has advocated many times that government resources should be channeled into promoting agriculture; lamented that for so many years, investment into mining, especially gold and bauxite have done the country more harm than good.

He cited that, mining has contributed to devastating water bodies, lands and forests which form the basis for survival of the population, such that both humans and animals are sometimes compelled to drink from the same contaminated water.

‘’Obuasi is a useless town and all money extracted from the soil does not depict development’; basing his reason on the fact that mining in the arena has reportedly yielded the country only $2.16 Billion for a period of 22 years.

“So why would you go and destroy that land for 22 good years and get $2.16 Billion, whereas cocoa generates about one billion dollars a year! So within two years, cocoa would have doubled that money. You are waiting for 22 years, and you find it as important. Are we serious?” He bewailed.

Mr. Wiredu also condemned the Sinohydro bauxite deal which seeks to provide $2 billion worth of infrastructure of government’s choice in exchange for Ghana’s refined bauxite.

The vociferous commentator indicated that, China possesses more bauxite resources than Ghana, implying the former may not even be in need of those resources.

“The reverse side is, that space if we’d gone to plant oil palm on it, every year we will get 2 billion dollars and since it is renewable; for about thirty years, we will get more money and the land will still be there.” He suggested.

In his view, many first world countries did not develop through exploitation of natural resources; thus Ghana should also begin to look at stepping up agricultural development such as oil palm and sugar cane plantation among others, which he claims could yield better profits for the country.