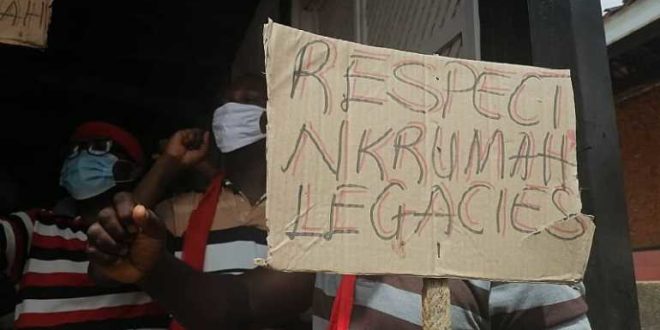 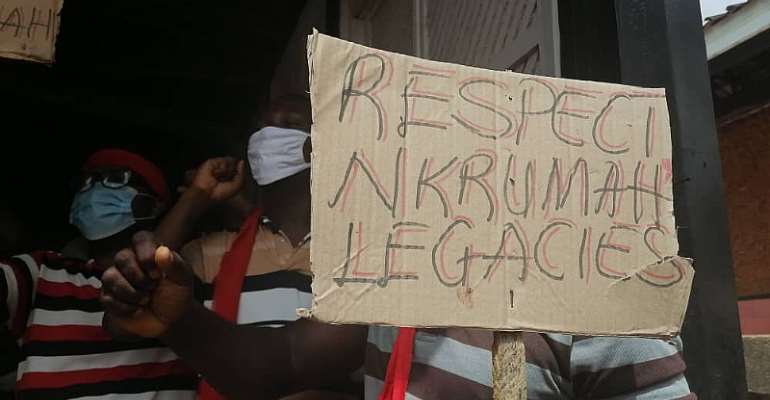 A group of people in Nzema and the family of Dr. Kwame Nkrumah have called for the withdrawal of a class-6 book, the Golden History of Ghana authored by Mercy Gyaa-Adiyiah, as it misrepresents and defames Ghana’s first president, Kwame Nkrumah.

Addressing a press conference on Monday after a mini-demonstration at the Kwame Nkrumah Mausoleum in Nkroful, a Senior Citizen of Nzema, Nana Mireku Tumi, called on the President and the GES to ban the book for the falsehood captured in the book.

“We, the Youth, Chiefs, and people of Nzema both home and abroad, the family of Osgayefo Dr. Kwame Nkrumah, by this press conference are convinced that the author of the history book meant to be used for teaching Class 6 pupils, has no useful knowledge to give, but on a carefully calculated mission to falsify world history, mislead the future generation and lead the nation into a disunited Ghana.” 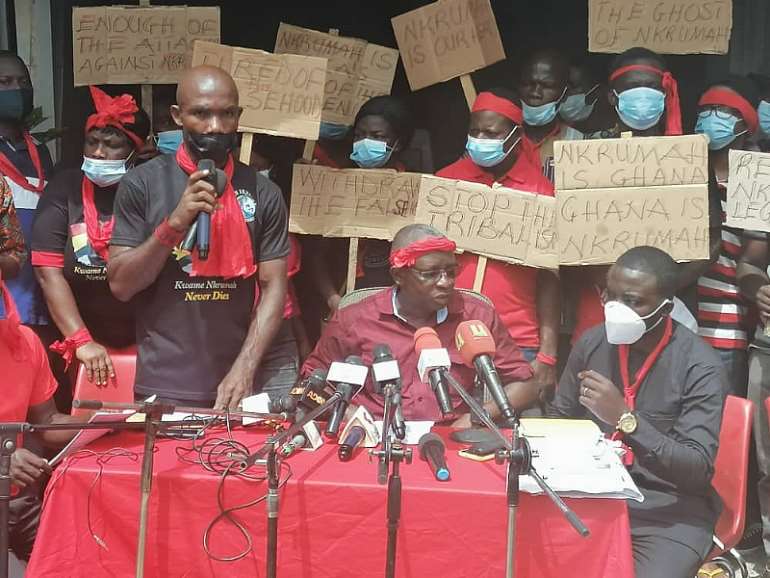 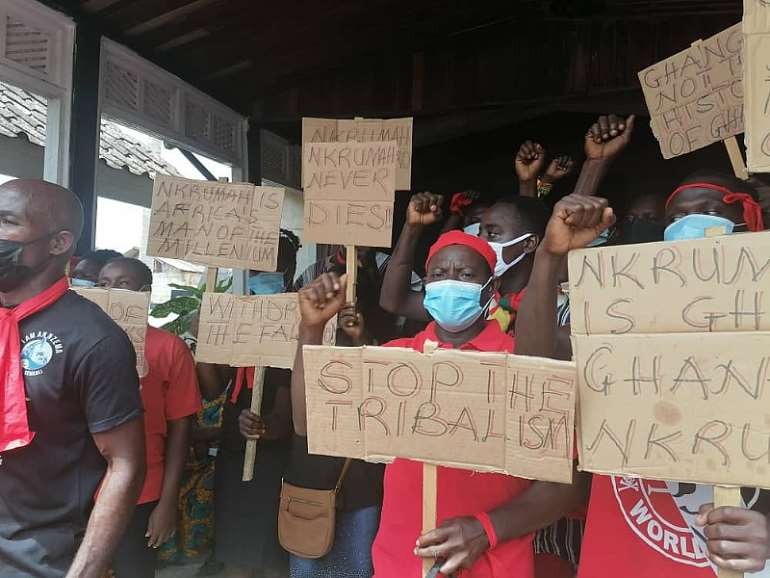 “To this end, we call on all the Ministry of Education, Ghana Education Service (GES) and the National Council for Curriculum and Assessment (NaCCA), and ultimately the Office of the President of the Republic of Ghana, to prevail on the author and publishing house for the immediate total withdrawal and destruction of such obnoxious publications without delay. Secondly, we are calling on the Government of Ghana to criminalize and ban the sale, ownership, and possession of such publications including the Golden History of Ghana meant for Basic 6 pupils.”

They also demanded an apology from the author and the publishers.

“We enjoin the author and publisher of such defaming and destructive information to render unqualified apologies to the family of Osagyefo Dr. Kwame Nkrumah, all Chiefs and people Nzema (home and abroad), our brothers and sisters in the Volta Region, Ghana as a country, and the whole of Africa, for soiling the glorious reputation of Nkrumah; not only the first prime Minister, First President of the country Ghana but also Africa’s man of the millennium, to say the least. For the records, this movement calling for the withdrawal will continue to gather momentum, until author Adiyiah and her publishing house do the needful.” 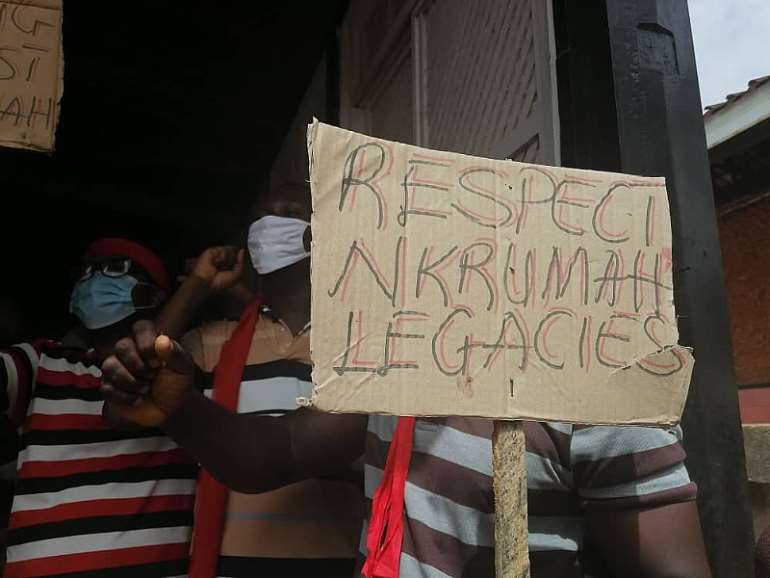 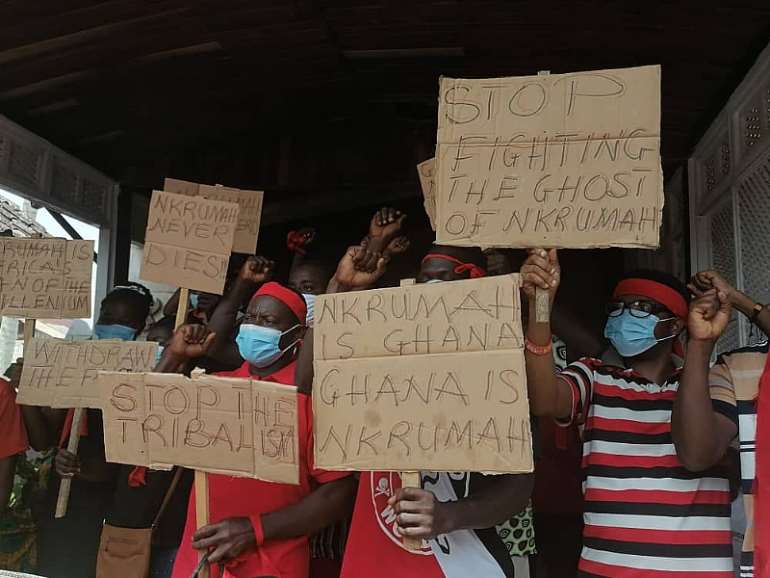 The agitated natives of Nzema Land supported by the family head of Dr. Kwame Nkrumah, who demonstrated their displeasure at the Nkrumah mausoleum in Nkroful highlighted some of the actual statements made in the book they found as false and defaming.

“page 34 of the Golden History under the sub-topic – Limitations of CPP indicates that Convention People’s Party (CPP) under the leadership of Dr. Nkrumah wasted resources of Ghana to support African Countries, e.g. Guinea. This is perhaps one of the funniest jokes that could be told of Africa. For if the extension of financial, strategic, and bilateral assistance to African countries to gain their independence was a waste of resources, then what do our various African leaders meet almost every year to do, all in the name of uniting Africa in whichever form, under the name Organisation of African Unity; even after more than 50 years of Nkrumah’s seeing that light and advocating for same as the panacea for true Africa’s development?”

They also questioned the book’s false claim that Dr. Nkrumah did not respect traditional leaderships and was also a dictator.

“What is very annoying though not surprising, is the author’s inability to substantiate this hollow claim in the book; as she obviously lacks facts to land this bunch of falsehood on. In No.3 of the sub-heading, the notorious ‘gospel’ according to Mercy Gyaa Adiyiah states that, Dr. Nkrumah was a dictator whose command must be obeyed without complaining. This is most unfortunate and absurd, to say the least. Ladies and gentlemen of the press, if dictatorship was what Osagyefo Dr. Kwame Nkrumah used in achieving all that Ghana became blessed with under his leadership, then why should we all as a nation not establish a whole university where our youth could be studying, trained, and become awarded degrees in dictatorship even at the doctoral level? If dictatorship is that rewarding, and we are still embracing the opposite of it, then the psychiatric hospitals should be widened enough to accommodate all of us, as we should be very sick in the mind, to the extent of not allowing such dictatorship to continue, so we could have our land changed into a paradise by now.“

They carried placards that read; Respect Nkrumah’s legacy, Stop Fighting the Ghost of Nkrumah among others.