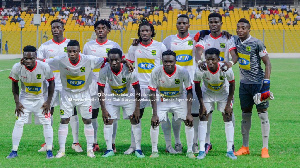 Asante Kotoko have escaped Fifa’s wrath after paying a fine in relation to the signing of Emmanuel Clottey in 2015.

The Porcupine Warriors, having been found guilty of breaching transfer rules by the world football’s governing body, were issued an ultimatum to cough up an amount of $240,000 [€218,915] by May 10.

Failure to obey the order would result in a transfer ban for the club, both locally and internationally.

“The Executive Chairman also paid $15, 000 to Fifa. We are grateful to Dr Kyei and also to Ashford Tetteh Oku of Close Marking Consult for the smooth closure of this case.”

The misunderstanding between Kotoko and Esperance involves the transfer of striker Emmanuel Clottey in 2015 and midfielder Kwame Bonsu last year.

After the Tunisians purchased Bonsu from the Porcupine Warriors last year for $150,000 [€136,829], Esperance also opted against paying up, instead deciding to offset the cost with part of Clottey’s 2015 arrears and demanding $30,000 [€27,366] more from Kotoko to completely clear the striker’s debt.

The issues reached the doors of Fifa who ruled in favour of the Tunisians.