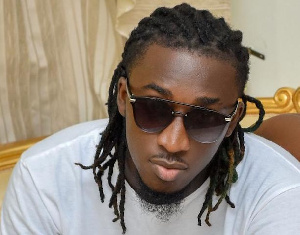 FOR someone who has been on Bullet’s Rufftown Records label for a year but cannot boast of releasing a single song under the label, one would think that Afrobeats artiste, Ray James, would be heading for the door but he says he has no plan to do so.

In the last few months, Rufftown Records has lost some of its signees such as Berlla and Ms Forson after complaints of being neglected, but Ray James, who so far has only featured on label mate Wendy Shay’s Masakra track, told Graphic Showbiz he didn’t want to work with any other label apart from Rufftown.

“No Rufftown, no record label, that’s my slogan. I believe there are better days ahead and I have all the patience to wait for my turn.

“I joined Rufftown Records last year and though I haven’t released any song yet, I have recorded many, which I’m confident will be released someday.

“I have even shot some videos with Fantana in South Africa so all I can say is that the future is bright under Bullet.

“What is even more important is that the team appreciates my talent which came to the fore after I came second in MTN Hitmaker Season 3. For me, it is times and seasons so when the time comes, I will definitely shine under Rufftown,” he said.

His boss, Bullet, has been accused of giving attention to only female artistes but Ray James said if that were the case, the likes of Berlla and Ms Forson would not have exited.

“I don’t believe Bullet is only in for female acts. They are rather approaching him more because of the good work he did with Ebony and that is the situation he currently finds himself in, but that doesn’t mean they only have his interest.

“He hasn’t shown any sign that I’m not worthy to be on the label and besides, Fantana was signed last year but people only got to hear of her this year when she released her first song.

“That is how the label operates and all the hard work behind the scenes will be heard by Ghanaians soon,” he said.

Previously known as Snow B, he rebranded to Ray James after joining Rufftown Records. He said Bullet chose the name to reflect his music identity and he had no regrets about that.

“We wanted a name that could make me stand out. The Ray comes from my real name Raynolds and the James from Jam Session (a relatively informal musical event, process or activity).

“I believe that in the same way that music audiences got to hear about Snow B, Ray James will soon be on the lips of everyone.

“I’m a good writer and I write most of my songs, I was doing that before I met Bullet. I wrote most of the songs I have recorded now, we only did a few together and I am looking forward to the best times when my songs are finally released,” he added.