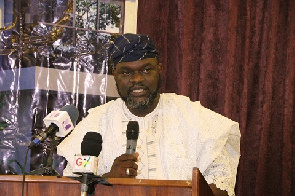 The Accra Chapter of the Yoruba Community in Ghana has condemned the verbal attack by some Nigerians resident at Kasoa, on some personnel of the Ghana Immigration Service (GIS) who were in the area to carry out their duty.

Due to this, the Accra Yoruba Community has called on the Ghana Police Service to arrest the law-breakers and punish them for their misconduct.

Captured in a video which has gone viral, scores of Nigerian youth based at Kasoa, Central Region, obstructed an official vehicle of the GIS and personnel from accessing a road to where the West African natives reside to carry out their official duty.

The Nigerian youth ranted and chanted, pouring unprintable words at the GIS personnel, who, eventually, turned away to their office.

The misconduct by the youth had been widely condemned by law-abiding aborigines of Ghana and foreigners, and latest to condemn the act is the Accra Chapter of the Yoruba Community.

Chief Oyeyemisola Fatuyi, chairman of the Accra Yoruba Community, said: “As law abiding citizens, well-meaning Nigerians dissociate themselves from such an obnoxious and primitive behaviour. We support the law enforcement agency to pursue the culprits and bring them to book.”

He reminded all Nigerians resident in Ghana that, Ghana remains a second home, as well as an investment destination to Nigerians.

In this regard, he said Nigerians are encouraged to be law-abiding citizens and ensure that they operate within the limits of the ECOWAS protocols.

The Yoruba Community pleaded with the Ghana Police Service not to let this bad conduct by the youth die, pointing out that punishment for crime must not be nepotistic.

“The Yoruba community appreciates the peaceful and cordial atmosphere in Ghana and will not condone any act of violence that will compromise that peace.

“We are happy to collaborate with the Nigerian High Commission and the relevant Law Enforcement Agencies to build a network that will expose any deviant who wishes to tarnish the image of Nigerians, as well as tamper with the peaceful atmosphere in Ghana.

“We call on our All Nigerian Community Executives (ANC) and leaders to restructure that body that joins all Nigerians in foreign land to become more effective,” Chief Fatuyi, who is also a Peace Ambassador, said.