Nigerian in Court for allegedly stabbing co-tenant over woman 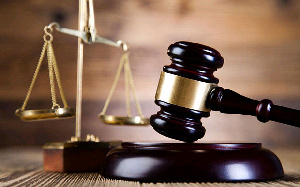 Emmy Duro, 29, Nigerian businessman has appeared before an Adentan Circuit Court for allegedly stabbing his co- tenant with a broken bottle at Nanakrom, near Ashalley Botwe in Accra.

Duro is alleged to have demanded answers from his co-tenant as to why he wanted to sleep with his wife, one Ruth Obeng Asantewaa.

The court, presided over by Mrs Sedinam Awo Balokah, admitted Duro to bail in the sum of GHC50,000 with two sureties.

It further ordered the accused person to be reporting to the Police every Friday and adjourned the matter to August 23.

Meanwhile parties have intimated to opt for an out of court settlement since they reside in the same house.

The Police are also on a manhunt for one Raphael, accomplice who is said to be at large.

Prosecuting, Chief Inspector Maxwell Lanyo told the court that the complainant Fred Eshun Kissi is a financial engineer and consultant, residing at Nanakrom.
The accused person also resides in the same area.

The prosecution said on July 12, this year at about 0130 hours, the complainant was sleeping in his apartment when Duro and Raphael knocked and called him to come out.

The prosecutor said Duro questioned the complainant about why he wanted to sleep with his wife Ruth.

It said before the complainant could say a word, the accused persons started beating him.

The prosecution said the complainant entered his room, but the accused persons followed him into the room.

According to the prosecution, they took a bottle each, broke them, and stabbed the complainant’s eyebrow the back of his head, and his right arm with the broken bottles.

The prosecution said the accused persons on seeing the quantum of blood oozing from the wounds of the complainant abandoned him and escaped.

It said the complainant was rescued and he later reported the matter to the Police.

The Police issued a medical form to the complainant after which he was rushed to the Holy Bridge Clinic at Nanakrom where he was admitted.

It said Duro was nabbed but Raphael could not be traced.

On July 13, 2022, the prosecution said the complainant brought the medical form which was duly endorsed by Dr. Francis M. Djangmah, a medical officer of the clinic.

The prosecution said Duro in his investigation caution statements admitted the offense and mentioned Raphael as his main accomplice.

Tags Nigerian in Court for allegedly stabbing co-tenant over woman