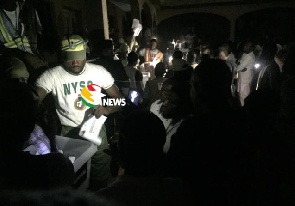 The power crisis in Nigeria has reared its head at some polling stations as officials of the Independent National Electoral Commission (Inec) resorted to lights from smart phones to sort out ballots for counting.

In an instance, a car’s headlight was brought in to illuminate a center for counting to begin.

He reported from the Maitama Model Primary Polling Centre that agents of the various political parties as well as electoral officers pulled out their mobile phones to illuminate the centre for counting of the ballots.

But generally the elections have been described as peaceful by the West African Network for Peace-building (Wanep).

Its co-chair, Barrister Aisha Abdulai, told journalists on Saturday that despite deadly violence cases recorded at some centres, there has been relative peace across board.

So far, 33 cases of electoral violence have been recorded, according to our correspondent.

Cases of some persons wielding machetes were also recorded.