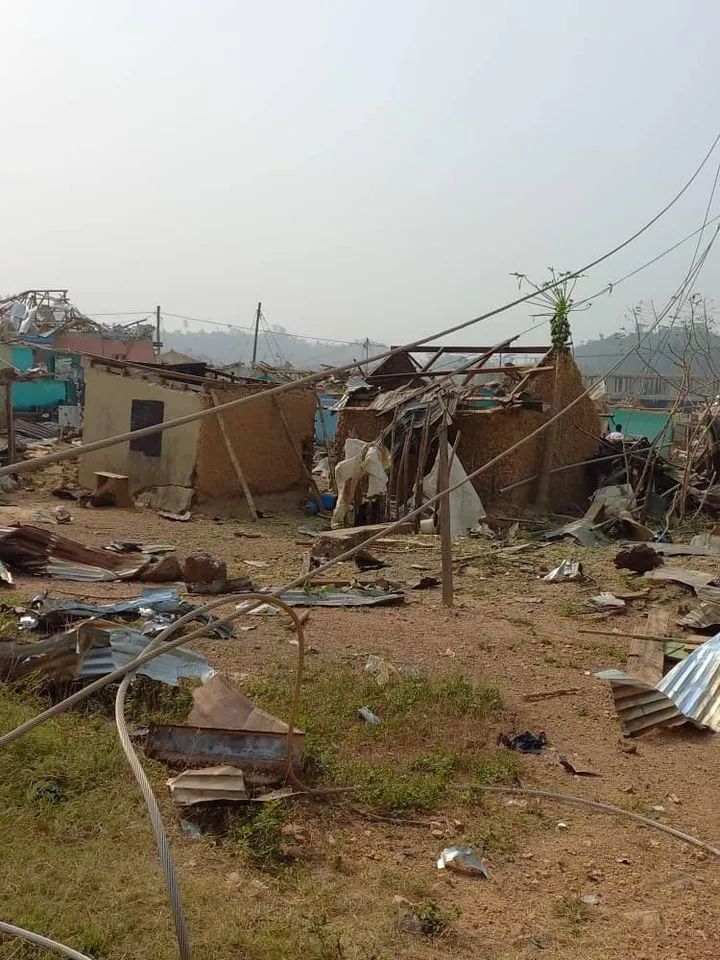 The National Democratic Congress( NDC- USA) rapid response team send their condolences to the Chief and people of Apiatse over the tragic loss of lives caused by the explosion which has struck the Apiatse township and surrounding settlements.

“Like most Ghanaians, we the NDC-USA have been saddened to hear the tragic loss of lives caused by the explosion which has struck the Apiatse township and surrounding settlements”.

Read the Full Press Statement Below:

The Apiatse Disaster, our Words of Sympathy and Prayers Go to the People of Apiatse.

On Thursday, January 20, 2022, a massive explosion at Apiatse, a small town near Bogoso in the country’s Western Region, caused a sizeable bowl-shaped cavity in the ground on the highway and left at least 17 people dead and 155 injured with an estimated 500 households and other properties destroyed, leaving many people without shelter.

Like most Ghanaians, we the NDC-USA have been saddened to hear the tragic loss of lives caused by the explosion which has struck the Apiatse township and surrounding settlements. According to eyewitness reports, the magnitude and extent of the explosion could be likened to ‘Weapons of Mass destruction’’

Initial statement from The Ghana Police service indicated that the truck that caused this major explosion was carrying explosives to a gold mine run by Toronto-based Kinross about 87 miles to the blast scene when it hit a motorcycle. This collision reportedly caused fire leading to explosion minutes after. President Nana Akuffo-Addo employed the military to join emergency efforts to contain the situation and promised rapid relief to the residents of the affected town.

In this regard, The NDC USA offers its sincere condolences, and our thoughts and prayers are with the people of Apiatse.

Clearly, the root cause of the Apiatse explosion incident was a Human error!

According to the Chairman of the Ghana Chamber of Mines, Mr. Eric Asubonteng, his outfit would ensure this tragic incident will not recur, but we add our voice to suggest that the quest to prevent such tragic events from reoccurring in the future goes way above and beyond rhetoric and prayers.

This is because, in 2017, a similar event occurred when scores of people were killed and injured after a tanker truck carrying natural gas caught fire in Accra, triggering explosions at two fuel stations. As a result, real questions need to be asked about the safety measures when explosives are being transported on Ghana’s busy roads.

It is worth mentioning that a first step in this fight is not necessarily about having police escorts but have vehicles with Flaggers and Flashers behind and in front of such trucks travelling at a speed limit of 25 miles per hour for example.

The Ghana Police authorities say the investigation into the circumstances of the explosion has begun, but initial reports suggest correct transportation procedures were followed. Then next thing you know, a chief from a community came out to deny the initial police. We need to get serious as a country as far as communication policy with regards to Disaster Management. Now, if that is the case, does it mean that the procedures should change?

Lessons have been for sure learned and Government and Mining Industry experts need regulatory and compliance policy frameworks in place to curtail future recurrence of this magnitude in the motherland.

According to Ghana web online edition of Thursday, January 2022, contrary to findings in the preliminary police investigations into the explosion, traditional rulers of the area insist there was no police escort accompanying the truck carrying explosives that caused the accident.

The police, in its initial statement on the accident, said preliminary reports had established that a police escort was with the truck carrying the mining explosives from the MAXAM warehouse through Apiatse for delivery. But speaking to a delegation of government officials including the Ministers of Land and Natural Resources, Works and Housing and the Western Regional Minister, the chief of Bepo near Bogoso, Nana Ataa Brembi II, debunked the claims by the police insisting there was no police escort with the truck when the incident happened.

Top-level Investigations are necessary in finding out what truly happened on the day of the disaster. Meanwhile, We the NDC USA propose that a first step in this fight is not necessarily police escort but henceforth, mining companies must have vehicles with Flaggers and Flashers behind and in front of such trucks travelling at a speed limit of 25 miles per hour for example. This approach is a common best practice in the USA for example.

We, the NDC USA, encourage the government to use this incident as a warning and be proactive to initiate a policy that will strengthen our laws and regulations on the transportation and conveyance of explosives for mining purposes. The Ghana Chamber of Mines should run with this because as the saying goes, “Charity Begins at Home”