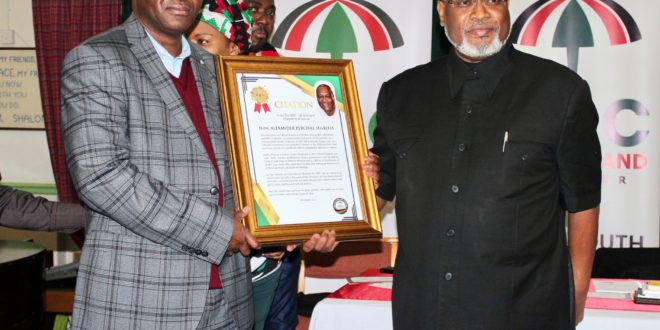 As part of activities to galvanize its rank and file, the general membership of NDC UK & Ireland Chapter had the first face to face programme post COVID – 19 on Saturday 5th March 2022. The event which brought together key stalwarts in the party is one of the proactive activities being rolled out by the chapter leadership to ensure its’ readiness for election 2024. The event paved the way for notable discussions on the party structures and functionalities. 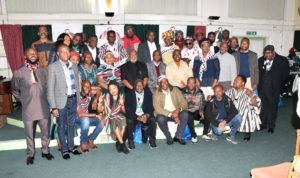 There were speeches delivered by various chapter executives to enumerate the state of their portfolios post-election 2020 and plans into 2024. In his opening remarks, the Chapter Organiser, Adamu Musa who was Co-MC for the occasion thanked members for their continued support and tenacity to always be ready to respond to the call to serve. Indeed, he touched on some of the challenges being faced by the average Ghanaian and how the atmosphere in Ghana is currently yearning for a drastic change.

Next in line was the Chapter Youth Organizer, comrade Alfred Freddy Kotogbor who highlighted the various activities he and his department has spearheaded post-election 2020. Notable among them was Youth mobilization, where through the formation of the TEIN, he has managed to bring students, academics and various workers in the Universities and colleges together. His submission was quickly followed up by the Chapter Women’s Organizer, Comrade Mary Gardiner who equally thanked members for the good job done and for the sacrifices both leadership and members committed into election 2020. She stated that the NDC won the 2020 election and decried how the people’s verdict was stolen from the NDC. Comrade Gardiner encouraged women to continue to play an active role in the party but hastened to add that in all our endeavours as a chapter, if there was no love amongst us then obviously our effort would be crowned in defeat. 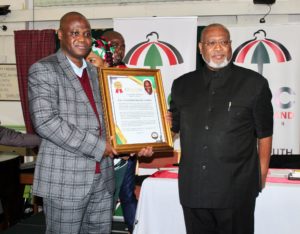 The Communication Officer for the Chapter, Comrade Simon Aworigo touched on the fact that communication was everyone’s business hence in the run up to the 2020 election he was very impressed that both members and chapter executives played active roles in diverse ways to project the party. He highlighted some of the challenges faced by the communication bureau in terms of logistics but was quick to add that the chapter leadership was always available to cushion and salvage the situation. 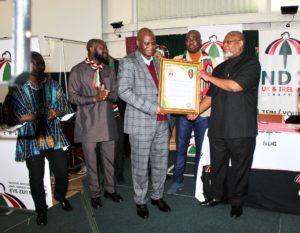 The Zongo caucus coordinator, comrade Issakar Sannie, also appreciated the chapter executives and members for their support in the effective coordination of the Zongo caucus. Comrade Sannie believed we did our best in 2020 but there is still more to be done going into 2024.

The next item on the programme was carried out by the hardworking Chapter Secretary, comrade Michael Dzidula Kudiabor. Comrade Kudiabor first seized the opportunity to thank all members for the effort and dedication going into election 2020. He acknowledged the immense contribution by each member in the chapter in terms of cash and kind in election 2020. He was moved by how various individuals in the chapter adopted branches singularly but still came to the chapter level to donate to support the party’s activities. Comrade Michael Kudiabor further appreciated individual members who contributed their widow’s mite into various funds organized by the chapter. He paid special recognition to the organizers of the COVID fund on behalf of the chapter to support members during that difficult period. The committee was made up of professionals both in the health, legal and social service sector to ensure members and executives who contracted the virus were given the needed support. These coupled with a host of others were some of the good contingency measures instituted by the chapter leadership to ensure the welfare of all members were well taken care of during the period. Comrade Kudiabor encouraged both leadership and membership to continue to be each other’s keeper as we are all we have as people united under the Umbrella party. 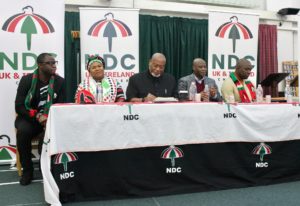 The event gave the Chapter leadership an opportunity for the recognition of the team at High Cross United Reformed Church and especially Madam Claudette Reid and Rev. Dr John Campbell. Chapter Secretary Michael Kudiabor invited his predecessor former Chapter Secretary Sam Quaye to join the Chapter Leadership on stage in presenting a citation to the team at High Cross United Reform Church which has worked with the chapter for the past 17 years. Rev. Dr Campbell picked up the citation on behalf of the Church team. The International Relations Director for the NDC, Hon. Alex Segbefia also received a citation on his continued support to the chapter and his selfless commitment and dedication to the NDC as a whole. Members and executives gave out generously during the fund raising led by Co-MC for the event and women’s organiser for Glasgow Branch, Miss Vera Hayibor. 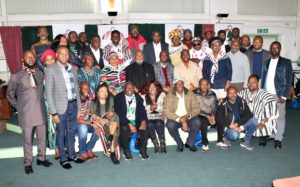 In his remarks, the able chapter chairman, Alhaji Alhassan Mbalba continued to show appreciation to his fellow executives and members for all the hard and good work done so far. He was more excited that under his tenure and leadership a lot has been achieved as a chapter despite all the challenges the chapter has surmounted in recent times. Chairman Mbalba indicated that the chapter membership drive keeps growing astronomically because of the key contribution by everyone. He further encouraged members to use the Chapter’s current successes to rather encourage each other as a chapter to keep up the good work and not to make us complacent. Victory, he believes, has not been won yet but the aroma in the air is such that we can easily project 2024 as being won.

Chairman Mbalba preached cohesion and tolerance to all members and reminded them that in spite of our individual differences, we come from the same root and that is the NDC. He admonished leadership and membership to always resort to dialogue and eschew words of provocation that is likely to stir up conflicts within the chapter especially now that the chapter will be holding its internal elections. In his closing remarks, Chairman Mbalba noted that indeed everything currently ongoing in Ghana is a clear indication that we are being led by a clueless government. A government that thrives on lies and deception and has resorted to intimidation to prevent people from calling them out for who they are. Chairman Mbalba therefore tasked all members to continue to be resilient and give their best at all times as our commitment to this struggle will depict the sort of future being laid down for the next generation. 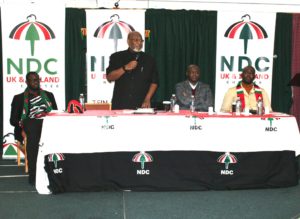 The guest of honour for the occasion Hon. Alex Segbefia equally paid significant gratitude to the UK & Ireland chapter for the good work done and how they continue to support the mother party at all times. He further seized the opportunity to express enormous appreciation to the chapter executives on how they have been able to coordinate affairs of the chapter even during the pandemic to ensure the activities of the chapter were not curtailed at any material moment. The former health minister went on to applaud the chapter in the formation of new branches as part of activities to increase membership drive.

Hon. Alex Segbefia believes this is highly commendable hence the chapter executives must take credit for such initiatives. In addressing issues on internal matters, He touched on the need for members to continue to work hard but do that in line with the party’s constitution. The party was built on discipline and according to Hon. Alex Segbefia, that should be the hallmark for both leadership and membership at all times. He cited instances where the NEC of the party has been compelled to suspend some individuals who brought the reputation of the party into disrepute and dragged the image of the party in the mud.

Hon. Segbefia equally elaborated on how some executives worked as individuals instead of a team in some other chapters in the diaspora – hence cautioned the chapter executives to always work as a team and use the party’s constitution as a guide at all times. On the issue of the upcoming internal elections, he highlighted some measures in place to ensure fairness in the process but again emphasized on the need for all prospective candidates to treat their contenders with the highest level of respect. The electioneering process should be devoid of insults but rather based on issues and previous contribution towards the success of the party.

In conclusion, Hon. Segbefia used his experience as both the former NDC Chapter Chairman for UK & Ireland Chapter and as the former Health Minister to encourage members not to doubt the extent their active participation in the party’s activities could pave way to various opportunities for them in and out of government. Members were given the opportunity to ask some questions on the way forward into 2024 which were clearly and tactically answered by the guest speaker Hon. Alex Segbefia and chapter chairman Alhaji Alhassan Mbalba to the admiration of everyone. Comrade Awudu Sannie, Deputy Chapter Secretary delivered the closing prayer bringing the programme to a successful end.