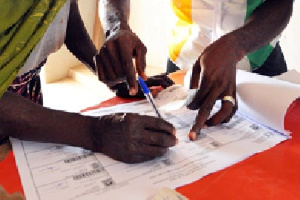 The National Democratic Congres has sued the Electoral Commission at the Supreme Court over its decision to compile of a new Voters’ register ahead of the 2020 elections.

The opposition party has consistently kicked against the decision by the election management body to compile a new Voters’ register but the EC has also maintained that it will proceed with its decision.

Several Civil Society Organisations including IMANI Africa have also kicked against the decision for a new voters’ register.

The call for a new voters’ roll was made ahead of the 2016 elections by the then opposition NPP which culminated in a series of demonstrations by the Let My Vote Count Alliance. However, due to financial constraints, the EC failed to heed the call.

After meeting stakeholders over the issue, the EC said a new register will be used for the next general elections.

According to the EC, compiling a new voters’ register ahead of the general elections is in the best interest of Ghanaians and will save the nation over 170 million Ghana cedis.