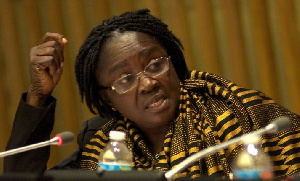 The call on former president John Mahama to consider a former minister of education Jane Naana Opoku Agyemang as his running mate has suffered a jolt.

Some National Democratic Congress (NDC) heavyweights have kicked against her candidature, arguing it will erode the gains made by the party over the years to win the hearts of voters, especially floating ones.

Naana Agyemang has been mentioned as one of the frontliners for the running mate slot alongside a former Managing Director of the Tema Oil Refinery, Kingsley Awuah-Darko, Cadman Mills, a former governor of Bank of Ghana, Dr. Kwabena Duffuor, MP for Korle Klorttey, Zanetor Rawlings among others.

Deep throat sources say influential personalities including some National Executive Council members have advised the flagbearer of the Umbrella Family to drop Naana Agyemang from his campaign plans for now because she does not have any base or constituency in the party.

“Until she was appointed an education minister, who knew her? The running mate position is a serious business and it should be someone who can rally people behind the flagbearer. Go to the North right now and mention her name and see if they’ve even heard of her before. Let’s get serious,” a party stalwart who wants to remain anonymous said.

“We need someone who resonates with votes. She’s a technocrat, but when it comes to the grassroots who knows Naana Opoku Agyemang. Apart from the University of Cape Coast where again does she have a base, even the education ministry it wasn’t everyone who knew her. We need someone who is for the masses,” another said.

Dailymailgh.com is also picking signals that the anti-Opoku Agyemang faction within the party believes she caused a lot of disaffection for the party as education minister since it was during her tenure that the teachers’ trainee allowance was scrapped.

“The termination of the teachers allowance virtually brought the NDC on its knees ahead of the 2016 elections. The NPP capitalized on it and promised the people they’ll bring it back and that got a lot of teachers campaigning against us. Now the NPP has reinstated the allowances. You think the NPP will not incite teachers to use it against us when she is chosen as a running mate? It will not be the right decision for JM to have her on his cards.

“She failed us. If he would want to appoint her as a minister when we win that’s fine but as a running mate, no. That will be suicidal,” an executive said.

Another argument on the cards, according to party sources, is whether Ghana is ready for a female vice president.

“That will be brilliant and another first, but the question is, are we ready now? The answer is a big no. We’re not campaigning for the optics now. Getting a female running mate now will be a major blow for the party because we’ve to market that person to be a presidential candidate after JM and as it stands now Ghana is not ready for a female president let alone a running mate. Whatever we do now we have to think about the next four years. I think Jane is a no-no for now. We need someone who can move the masses.”

Mr. Mahama will be meeting NEC on Monday, June 6, 2020 to make a justification for his choice of running mate after which an announcement is expected by close of day.