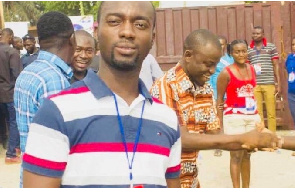 An activist of the ruling New Patriotic Party Atick Yakubu is blaming the opposition National Democratic Congress for being the originators of vigilantism in Ghana politics.

In a long article copied to MyNewsGh.com, Atick Yakubu argues that while there is the need to holistically address vigilantism in a non-partisan manner, its genesis must not be forgotten.

Recounting various instances when NDC meted out acts of violence to NPP members, he thanked Akufo-Addo for taking steps to end it all.

“During the 2009 Akwatia 6 polling stations elections , the NDC had invited some thugs into the town to cause Mayhem . They blocked the main road in front of their constituency office and beat anyone who was a member of NPP, beat our big wigs who passed and those who were lucky had their windscreens broken with stones . I was a witness to this . There was an instance my brother and I had to run for our lives because we were identified as sons of the constituency chairman by a woman . She gave the order that we should be beaten by the thugs they had imported to town in metro mass buses . They didn’t come in pickup vehicles but metro mass . That was how ugly it was . That was the impunity they exhibited.

Those who were at Talensi will tell you their story too . In Atiwa , Anita De souso drove her Tundra through party faithfuls like they were snakes in her way . I believe even if they were goats or sheeps she would have exercise some patience for them to cross but NO , they were NPP people in her way . In her eyes they are lesser than animals .

In Amenfi West ,those who got beaten will tell you their story . Our party faithfuls got beaten in every aspect of our politicking.Not even our members were spared at the student front. From NUGS to SRC , there are records of serious beatings and intimidation

I AM IN NO WAY TRYING TO JUSTIFY VIGILANTISM . I just want all of us to know where it started from . We never had vigilantism in our politics till the 6 polling stations in Akwatia and Atiwa .

This was what led to famous statements “ Atiwa mpo y3 kyer3 )mo Kakra “ and the regrettable “all die be die “comments . What I know is that governments have used the security forces to bully and intimidate opposition parties till the NDC started their vigilantism in 2009 .

The difference between us and them is that we have a President that has taken the steps to bring an end to political vigilantism by setting up a committee to investigate the happenings at the Ayawaso West bye elections . I can say on authority that those who got beaten by the National security were thugs from the house of Delali Bempong . He had more than 50 of them in his house just to cause mayhem and make sure we don’t have a successful election.

Even if God had told Delali and the NDC that they would won AWW elections they wouldn’t have believed it . For them , the only option was to ransack the election Centre and the election would have been postponed . To make a long story short , the 4 guys who started this operation were unfortunately met by the National security operatives . The NPP couldn’t tell their side of the story because the NDC were quick to run to the media and the whole narrative changed .