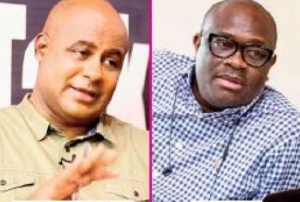 NDC boys fight over party IT

Two leading figures in the opposition National Democratic Congress (NDC) have locked horns over the management of the Information Technology (IT) Department of the party.

While Osei Kwame Griffiths, Director of the party’s IT Department, claims Stan Xoese Dogbe, a trusted aid of ex-President Mahama, is undermining his office, the latter has vehemently denied the charge.

His rebuttal has given a rare insight into the cracks at some notches of the opposition party.

As a juicy and critical department, it is a turf that whoever is officially assigned to run would definitely not countenance any seeming undermining, which is why the two are at each other’s throats.

The spat is not only about the alleged undermining of the office but also about the fear being expressed by Griffiths that Stan Dogbe is in the process of recruiting three IT persons from each of the 275 constituencies in the country, something the latter has denied.

An NDC WhatsApp platform was lit with accusation and counter-accusation during the week.

Stan Dogbe describes as false Griffiths’ claim that he is undermining his office as Head of IT of the party.

The tone of the correspondence defines the no-love-lost relationship that now exists between the two powerful guys in the opposition party.

“My attention has been drawn to false claims by the Director of IT at our party’s headquarters, Mr. Osei Kwame Griffiths, and which he is speedily propagating around that I, Stanislav Xoese Dogbe, is undermining his office and position as Director of IT,” Stan Dogbe said.

Explaining the basis of his suspicion about the IT Director, he states in the correspondence that “Mr. Griffiths is claiming that I am undermining his office, claims that I have started the recruitment of three IT officers from each of the 275 constituencies without any recourse to him or his office.”

In his rebuttal of the allegations against him, Stan Dogbe points out that he is not recruiting anybody from the constituencies for any assignment in the party.

“I have never recruited, started recruiting or even dreamt of recruiting anybody from the constituencies for any assignment for our party, the NDC, let alone IT officers,” he denied.

He seized the opportunity presented by the subject to state that there was work for the party, a reference to the campaign for the 2020 election, requiring individual energies and expertise to be directed towards just that.

It appears that there is an overlap of functions in the party, a dysfunction which is compromising efficiency.

There is also backbiting and undermining of each other at various strata of the party and it was clearly expressed in Stan Dogbe’s correspondence.

“The earlier people assigned responsibilities by the party focus on their assignments and desist from wasting their time scheming against others, fabricating stories and seeking to damage people, the better it will be for the task we have ahead of us,” he pointed out.