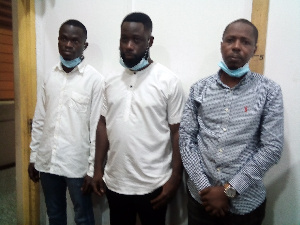 A crack team of operatives from the ITF Unit of National Security, has arrested a popular gold dealer and his accomplices, suspected to be part of gold smuggling syndicate trafficking Ghana’s precious mineral resource outside the country on the blind side of the state with the aim of evading tax.

The key suspect, Benjamin Abeiku Quansah, a gold dealer based in Tarkwa and Accra, with his accomplices numbering about four, were picked up at the Kotoka International Airport (KIA) in Accra, whiles allegedly smuggling large amounts of gold bars out of the country on Friday, October 9, 2020.

The Herald’s sources at the airport, who witnessed the arrest said, Mr Abeiku Quansah, was picked up on Friday morning, while travelling onboard an Emirate flight, number EK 788 in the company of one of his accomplices by name, Daniel Tetteh.

The names of other accomplices, were given as; Ebenezer Addo – a clearing agent and a certain Mavis Adomako – a worker at Aviation Ghana Ltd.

It is unclear, which country the gold, which weighed 14.4kg with an estimated street value of about $1million dollars, was being transported to, but many suspect Dubai in the UAE to be the ultimate destination.

The Herald’s independent checks conducted on the main suspect, Mr Abeiku Quansah revealed, he is well-known in the gold business and owns two companies in the industry. Their names were given as AGB Company Limited and Karl’s Group.

According to sources, the four suspects are all Ghanaian nationals and are currently in the Bureau of National Investigation (BNI) custody in Accra, assisting with further investigations.

It is unclear how the gang managed to outwit security arrangements at the airport which is supposed to be rigorous.

It’s also unclear if National Security will pick up other conspirators.

This is the second time the National Security’s ITF Unit, has rounded up a gold smuggling syndicate in a space of three weeks.

The first arrest, as reported by The Herald was made at the border town of Aflao in the Volta Region.

They have been sending out large amounts of gold bars out of Ghana through the Aflao border, in what appeared to be a long running illegal business that denies the state the needed revenue.

The cartel, including Ghanaians and foreigners from neighbouring countries, in partnership with their Indian financiers, have been behind the smuggling of Ghana’s precious mineral resources in huge volumes using Togo.

The Herald’s information is that they have some political and security backing in their illegal business, which is making Ghana lose millions of US dollars by way of revenue.

But on that fateful Wednesday, luck eluded some of them, when the National Security’s ITF Unit upon a tipoff, stormed the Aflao and arrested them, while in the act, smuggling yet another 15 kilogrammes of gold out of the country.

Numbering about four, they claimed they are Malian nationals, but living in Aflao.

They mentioned that they were smuggling the gold for a certain Alhaji Braima, who is resident in Accra.

Details, as well as the identities of the suspects are sketchy.

But their names were given as; Mohammed Jaggar, Abdul Samad, Abas Inusah and one Musah, a Ghanaian and driver.

They were using two vehicles; one Toyota Corolla and Toyota Caravan.

The Herald’s correspondent at Aflao, who witnessed the arrest and the seizure of the gold believed to be in the region of GH¢5 million, reported that the suspects, were sent to Accra for further investigations.