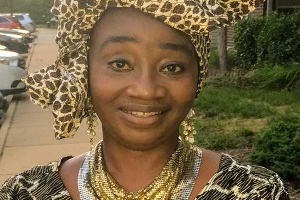 A daughter of Dr Kofi Abrefa Busia, Nana Frema Busia, has listed some corrupt activities under the late Jerry John Rawlings, who hitherto was hailed for preaching, “probity, accountability, transparency and social justice”.

In her latest article titled “Jerry John Rawlings in perspective”, she wrote that a retrospective assessment of the era of the late former president whose “revolutionary” insurrection onto the political scene was like a “cataclysmic earthquake” would reveal that he created a chilling crater centre stage with executions of all living former heads of state and other senior military officers, amid calls of “let the blood flow”.

Ultimately, however, Rawlings had the semblance of “a hailed tragic figure, who failed to achieve his idyllic acclaimed goal of aiding the poor masses against corrupt officialdom”.

She observed that today, corruption has become a daily meal and an intractable national pastime including at the grassroots level.

“Whereas death may be the penalty for the treason of constitutional overthrow, which he, former President Rawlings was also guilty of, certainly, death by firing squad is not the penalty for corruption or leadership failure of its systemic control, otherwise Mr Rawlings doubly qualified to be in an execution line up and most of Ghana in the queue,” Busia wrote.

“Indeed the senseless and gruesome human sacrifice/murders of innocent Judges during ‘J.J.’s second coming’ after the overthrow of the Dr Hilla Liman administration which traumatized the nation still make us cringe about sordid injustice.

The ‘Junior Jesus’ captivating boom rhetorics to jolt our conscience about societal decadence and corruption, and the signature J.J zeal to usher in an austere conscientious purity against “kalabule” had instant resonance, but, also failed even as applied under his own governance,” parts of her article read.

Here are some illustrations that made intolerance of corruption a stated but operational myth. La Palm Hotel: It was Under President J.J Rawlings tenure for example when a section of La Palm Hotel completion was rushed for an AU summit. Ghana was billed overall, some $100m primarily from besieged SSNIT pension funds and GCB funds under duress, after a Manager’s alleged aircraft ride with him at a time when the internal assessment had denied the loan.

A claimed La Palm extension billed at US$15m never saw a pickaxe on any ground! The swimming pool was billed at over a million dollars. An eyebrow-raising highlight of the La Palm saga was work done by an NDC financier buddy of President Rawlings with the face value of $35,000 but was paid $1m with dubious justification.

Two independent sets of forensic auditors valued the hotel between $20m to $25m, thus Ghana could have had 4 to 5 La Palm Hotels under President Papa J’s Transparency, Probity and Accountability watch and received social justice for our money’s worth. Elmina beach resort was also “renovated” for $10m, just one year after its completion with public funds in a Ghana under Papa J”s prudential management.

Star Hotel at Cantonments which was integrated into La Palm as “Hotel Apartments ” became Private Residences with a few of its Select Secret owners not subject to forensic prying eyes, thus, busting our transparency bubble.

Ghana Airways: Forensic Auditors who squarely faced curses and confronted a loaded gun as well as security issues during the review, did conclude from the free-for-all corruption at Ghana Airways that the National Airline was intentionally bankrupted under President Rawlings watchful eagle-eyed regime.

An outmoded DC 10, Aircraft advertised for $10m which Ghana purchased for $25m from Malaysia could not be flown without engines and documentation after it was refurbished. We then leased modern aircraft which our pilots could not handle since a technology transfer agreement for $2m had yielded Zero training. Thus we also leased foreign flight crew to augment dire mismanagement without sanctions, while some well-connected persons were flying to the UK and USA for $1.

Highlights of Ghana Airways audit included: hushed tales about a mystery “Alhaji” who was alleged to collect money for the “Castle” routinely without any witness willing or daring to reveal his identity; mind-boggling serial million dollar insurance payments on a permanently non – functional DC 9 aircraft that had crashed; and a $4m foreign loan with $1m deposit in an untraceable ‘The Account’ in the UK etc.!

The effect of “revolutionary might is right” with “excesses ” to demystify Power and hand it over to the masses without corresponding civic and humane responsibility in an “us vs them”, professional/elite vs underclass, rich: then defined as having more than one refrigerator or toilet vrs poor, has not created a fair equalitarian society.

On the contrary, the J.J applauded towering inferno of righteous indignation, with its alter ego of people’s defence cabals, and Gestapo type, gun tooting commando operations in terrorising homes and businesses and extracting curfew compliance deepened the mistrust and social class schism with tribal undertones.

It also left a backfired trail of exploited recycled youth without skills, who latter-day politicians have woefully manipulated and militarized into polarised vigilantism which is ongoing and haunting us in spite of recent laws.