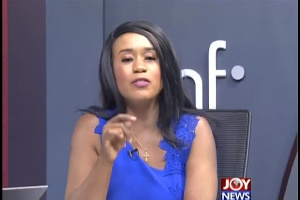 Lawyer for some aggrieved customers of Menzgold Ghana Limited, Amanda Clinton does not believe a claim by the company’s Chief Executive Officer, Nana Appiah Mensah that he will be able to pay off customers if he retrieves his supposed $39 million locked up in a Dubai firm, Royal Horizon.

She said the absence of proof that Nana Appiah Mensah has indeed won that case in Dubai makes it hard for him to be trusted to bring relief to customers.

Speaking on Eyewitness News on Monday, Amanda Clinton said the government would have long ago stepped in if the claims were true.

“He hasn’t proven that the money exists. Why hasn’t anybody still sighted this judgement [of the Dubai case]? I haven’t seen it and as a lawyer, I have asked for it but they haven’t given it to me. If the government was told that thousands of money from Ghanaians have locked up, why on earth will the government not pursue a democratic [approach] with an international team and Attorney General?”

NAM 1 at a press conference on Monday said the ability of his firm to settle debts owed his customers is among other things dependent on government’s willingness to help the company retrieve some $39 million debt owed him by Royal Horizon.

He also called on the government to unfreeze his account and that of Menzgold to enable him to settle debts he owed his customers.

But Amanda Clinton said she is unsure if finality will be brought to the matter given the lack of documentation on the said transactions.

“If it can be shown that thousands of money from Ghanaians was taken to Dubai and needs to be returned to them out of public interest, it is something that he can perhaps provide the evidence and then there will be pressure on government if this is true. Till date, I haven’t seen this documentation”, she added.

Providing solutions on how his clients will be paid off their monies, Amanda Clinton suggested that a bank account should be set up under the supervision of auditors.

“First and foremost, what happened in situations like this: where a large amount of money is owed the public, a bank account can be set up and earmarked with the government knowing about the bank account which will ack as a sub-account. Over time, we will have auditors to oversee the distribution of the money to people.

This is a defrauding matter so we must have these bank accounts. If NAM 1’s team is able to produce evidence of the $39 million, I am sure the government will go out for this amount if it exists. The government can pursue this matter if the evidence is provided. But the bank accounts can be set up and earmarked for this purpose.”