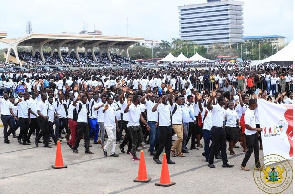 NabCo trainees settle on Friday to hit the streets

Beneficiaries of government’s Nation Builders Corps program have decided on Friday October 10 to ‘go red’ on government over the seeming nonchalance about their prolonged grievances over unpaid salaries.

This was contained in a communiqué issued by the coalition on Monday May 6, 2019. The decision comes after several failed attempts by the trainees to draw the attention of government to their complaints about some 5-month arrears unpaid by government.

They want to, through the demonstration, register their frustrations and demand necessary action from relevant stakeholders.

The graduates, who have been enrolled on eight different modules of the the programme, have been working since its inception in November last year but say some have not received their promised GH¢700 monthly stipend for which reason they had planned to embark on a nationwide demonstration.

The Friday Date is however a slight change from the initial Wednesday 8th May set by the group for the demonstration.

The change they say was necessitated by information from the Ghana police service to the effect that Friday will be a more convenient date for the deployment of police personnel for the protests.

Executives of the Coalition of Nabco Trainees urgently wanna crave the indulgence of all Nabco Trainees, sympathizers and the Media that GHANA POLICE SERVICE HAS RECOMMENDED THAT FRIDAY, 10th MAY IS CONVENIENT TO DEPLOY ENOUGH PERSONNEL TO PROTECT TRAINEES.

We will by this communiqué encourage all Trainees to use this opportunity to team trainees from all districts level for a massive turn up of the Demonstration happening on Friday, 10th May, 2019.

Finally, we will make this official appeal to all module implementation agencies and various institutions engaging Trainees, to kindly give them a break to vacate their posts on Friday for this massive exercise.

OUR COLLECTIVE WELFARE IS INEXTRICABLY INTERTWINED TO OUR SECURITY