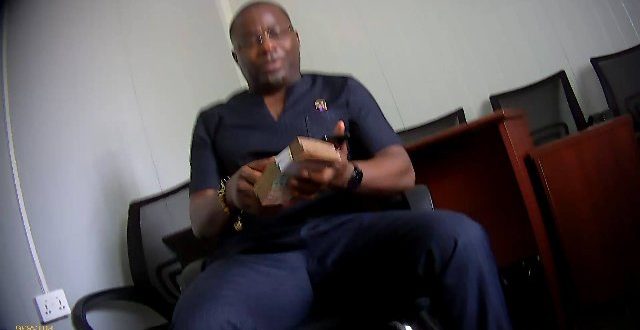 In another explosive documentary, investigative journalist, Anas Aremeyaw reveals that government officials are circumventing measures to curb illegal mining and allowing a company to mine.

The undercover work showed the officials receiving various sums of money to facilitate the process and provide security protection for the mining company.

When the war on galamsey was declared, government decided to give a clear picture of the scope and duration of the intervention. It, therefore, set up the Inter-Ministerial Committee on Illegal Mining (IMCIM) to implement the two-year road map.

While the Committee has received plaudits for a good job done so far, some complaints have also been heard about underhand dealings involving officials in charge at the IMCIM who allegedly take bribes to allow people circumvent the rules of the roadmap.

The secret filming captured Secretary to the Inter-Ministerial Committee on Illegal Mining (IMCIM), Mr. Charles Cromwell Bissiw, taking cash amounting to GH¢35,000 in three meetings through one Andy Owusu, a connection man, to circumvent the process to renew the mining license for ORR Resources Enterprise.

This was to ascertain whether there really are shortcuts to mining illegally in Ghana after the ban and institution of the Road Map.

Watch the video above: