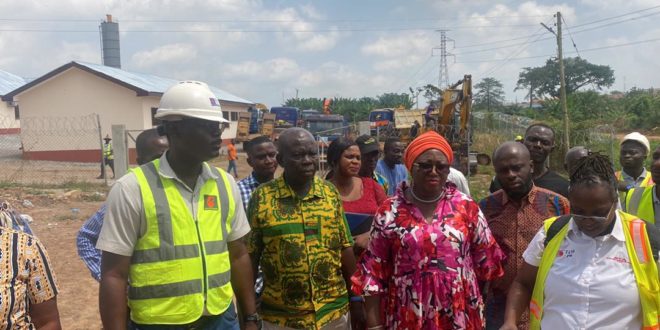 The main project stretches from Takoradi on a single lane through to the Greater Kumasi where the lines become double so as to take load and also ferry people to and from.

Joined by some party executives and her special assistant, the MP together with the consultant and contractor also inspected the facilities on site including a visit to the laboratory room where testing of sand and water were being undertaken.

Asking questions while on tour, the MP indicated to the consultant the desire to have the project completed within the 36 months it has been envisaged in the contract.

Madam Appiagyei was hopeful that the project would open up the Kaase community for commercial business and trade after its completion.

The Asokwa MP expressed delight at the meticulous manner the project contractor and consultant were undertaking the project.

She observed that such projects often begin with a lot of time and effort spent on engineering works before actual work is seen on sight, adding that many who do not understand this feel the project has delayed.

She was upbeat that both underground and actual works would be completed on schedule so that residents can see real business within the community and in the Kaase enclave.

“I am highly impressed with the meticulous and procedural manner work is being done in this area and I must commend the consultant and contractor for taking time to build something that would stand the test of time and ensure value for money. I am sure Kaase residents who say they have not seen anything would soon seen real work on the ground and appreciate the efforts of my government”, Madam Appiagyei stated.

Marion Dwamena, Consultant and Deputy resident engineer with GENERAL Engineering Group said she was happy with the visit of the MP for Asokwa and promised that the company would deliver quality work.

Currently, she noted that 50 percent of the old  rail lines that were across the project site and elsewhere in Kaase had been removed and was hopeful all will be completely cleared very soon.

Boulders and other materials needed for the project, she noted were available for commencement of actual work.

“We are happy to see and learn government’s interest in this project and we are detemined to deliver on the scheduled date once actual works commence on site”, Madam Dwamena noted.