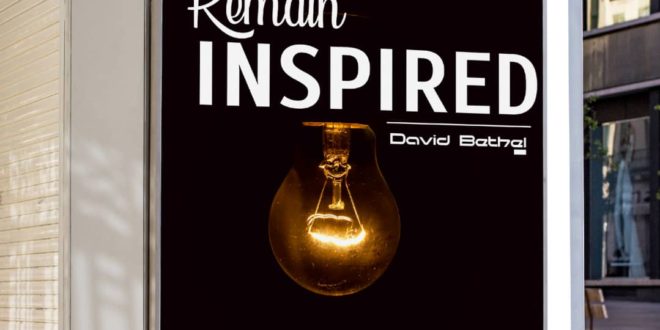 After speaking at an event few weeks ago, a young man approached me and said he wanted to have a word with me. I was to be taken to the holding room to meet with the host and other dignitaries after the event as planned and so I asked him whether he could wait for a while, which he graciously agreed to do. After about half an hour, I stepped out of the holding room to meet with my new friend. Something very intriguing came up whiles he was all about admiring my delivery at the event.

He looked at me and said with such a profound sentiment; “David, you are one of the greatest motivational speakers of our time” and I responded, thanks for your kind words but I am not a motivational speaker, I am rather an inspirational speaker. I could tell from his facial expression that he had more questions than answers even though we had to end our brief catch up. I after this day saw the need to draw the heart of men to what it really means to be inspired.

My usual, let’s try to get to understand the word “Inspiration” even though we may have a thought on what it means.

Inspiration has an unusual history in that its figurative sense appears to predate its literal one. It comes from the Latin inspiratus (the past participle of inspirare, “to breathe into, inspire”). A connotation in English mostly associate it to “the drawing of air into the lungs” since the middle of the 16th century. This breathing sense is still in common use among doctors, as is expiration (“the act or process of releasing air from the lungs”).

However, before inspiration was used to refer to breath it had a theological meaning in English, referring to a divine influence upon a person, from a divine entity; this sense dates back to the early 14th century. The sense of inspiration often found today (“someone or something that inspires”) is considerably newer than either of these two senses, dating from the 19th century.

The takeout is this; inspiration has original divine elements that has no physical interference in its inception. Let me make it a lot simpler by saying that you cannot inspire your own self. Amidst the numerous denotations and connotations given to this word, I will want to touch on one aspect in this piece.

Let us emphasize on the divine nature of inspiration, its essence, and perhaps its relevance in the time in which we find ourselves.

As a Christian – my giving on this will not be complete without scriptural references. To begin with – the matter is made more understanding with the words of Paul the Apostle in the 2 Timothy 3:16-17

16 All Scripture is given by inspiration of God, and is profitable for doctrine, for reproof, for correction, for [a]instruction in righteousness, 17 that the man of God may be complete, thoroughly equipped for every good work.

Perfect reference from a perfect source to paint a perfect picture, just as we needed it. What this scripture is literally pointing us to is a source of divine inspiration.

God in His wisdom gave us a means to survive on our everyday endeavours as humans by feeding on His Word inspired by Himself the Creator to the benefit of His creation.

The bit of etymology on the root word gave us an understanding of the breathing sense that has to do with (“the act or process of taking in air into the lungs and the contrary”). Let this form a concluding thought of our short discourse.

And the LORD God formed man of the dust of the ground, and breathed into his nostrils the breath of life; and man became a living being.

This is the genesis of man and he could only become a living being after God breathed into him. In addition, there after man became powerful enough and was eventually given the entire creation to rule. What we need to be mindful of is that until we have this breath (divine inspiration), we are not well poised and prepared enough to stand the good, the bad and not so good happenings in the world in which we find ourselves.

Inspiration as discussed here is lot more different from motivation. Motivation is formed mostly out of humanly calculated motives and efforts to hit certain ends and they may or may not work as planned. Ultimately, this divine element is able to defile your motives (motivation) and shift you into alignment with God and His purpose for your life. Divine Inspiration eradicates fear and instigate certainty, hope and above all faith. I will be bold enough to mention that you will never live an entirely fulfilled life if you are missing this divine element.

The world out there may be full of fear and uncertainties, but not after you have had an inspiration from the Word.

With a willing heart, the Word of God is able to take you through the highs and the lows of life and get you refined.

I will in subsequent posts share a broader perspective on the subject of inspiration in so many facets, but until then, REMAIN INSPIRED by the Word of God in this challenging moments we find ourselves