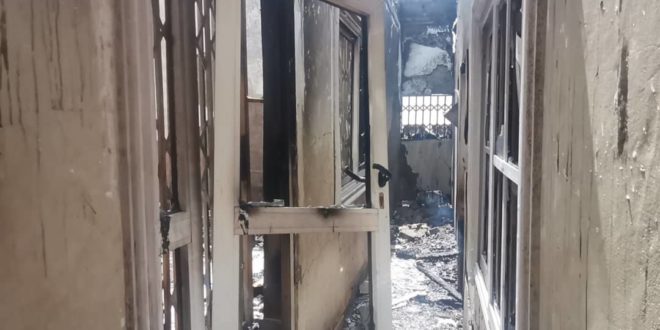 A 48 year old woman and her two children have been burnt to death in a fire disaster at Asuyeboah North near Kwadaso in the Ashanti Region.

One person who  sustained severe injuries has been admitted at the Okomfo Anokye Teaching Hospital for treatment.

Madam Felicia believed to in her late 40s reportedly died with her two children, Obed Owusu, 11, and Chritable Owusu, 9, on in the wee hours of Monday September 19, 2022.

Some eye witness in an interview with OTEC News Kwame Agyenim Boateng disclosed that the family of four got trapped in theor rooms when the fire broke out but the man among them managed to got out.

“The incident occurred around 12:30 to 1:00 am on Monday when we saw a tick smoke around the 10-bedroom house. Residents in the vicinity rushed to help but all our attempts to save the family proved futile.”

“The only survival among them, Mr Owusu managed to escape after creating a hole in one of the burglar proof windows but his efforts to rescued his wife and children came to nothing as they were already burnt by the blazing fire”. A witness who pledged anonymity told OTEC News.

The charred remains of the three have since been deposited qt the morgue of Okomfo Anokye Teaching Hospital.

Properties at the house amounting to thousands of cedis were burnt completely in the inferno.

A police source at the Asuyeboah North Police post said they have begun investigating the incident.