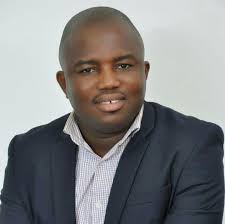 The Madina Chairman of the governing New Patriotic Party has cautioned recipients of Ex President Mahama’s campaign trail money to beware of its consequences, describing the act as demonic.

According to the NPP chairman, there is nothing that could motivate a former president to embark on money sharing spree without shame apart from ill motive.

The Madina NPP Chairman, who is also known as chairman Dollar, indicated that even though a section of the public believe that The ex president shared the monies to pull crowd to his rallies but he thought there was something more to it. ‘I think there is more to it than just pulling the crowd, I do not believe the money is genuine, some potions would definitely be in it’ he said.

According to chairman Eric Yeboah, he was very sad after seeing the Vedio. ‘ come to think of it, this is a son of a former politician, who became an MP for years, minister for years, a Vice President and a President, and the only thing he could do to make his fans happy was to share monies to few of them?’. He quizzed.

Chairman Dollar condemned the ex president and called on Ghanaians to reject him in the upcoming elections since he has nothing better for the Ghanaians.

The NPP Chairman was speaking to a section of street hawkers in the madina constituency on Tuesday. He told the hawkers that what would better their lives is not the peanut that would be given to them on a campaign trail but rather proper and well paid jobs. That is why they should support the NPP in 2020 so as to enable the government continue with the one district one factory that would ensure every one gets a better paying job.

He told the happy looking scores of hawkers that, the future is bright and they should have high hopes in the country and the government under Nana Akuffu Addo. He reiterated the commitment of the government to ensure that ever Ghanaian gets a good education and good job