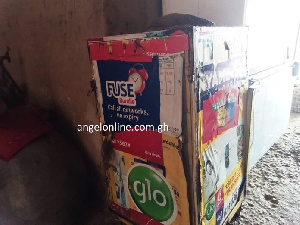 A mobile money vendor identified only as Akwasi believed to be in his 20s has been shot by four guys suspected to be armed robbers in his shop at Tarkwa Maakro in the Suame Municipality of the Ashanti region.

The vendor is believed to have been traced by the robbers from a bank.

The incident which occurred around 9:30am Thursday has thrown Tarkwa Maakro into a state of shock.

Some eyewitnesses told Angel FM’s Bismarck Mensah that the robbers asked the victim to release the money he withdrew from the bank to them while a guy was pointed at him.

He tried to outsmart them by throwing away the money which was in a polythene bag, expecting that the people around will take the money, but the armed robbers were swift and picked the money on the ground.

In the process, the robbers fired gunshot in the direction of the vendor, hitting his hand.

He was rushed to Komfo Anokye Teaching Hospital where he is receiving treatment.

The eyewitnesses told Bismarck that even though the police came around, the robbers had already escaped with the booty.

The police have commenced investigations into the incident.