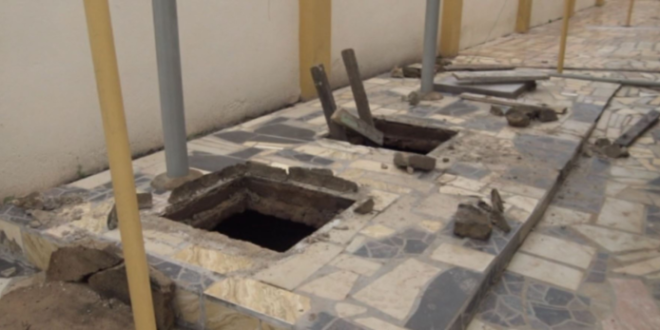 Minor drowns in cesspit in Wa

An eight-year-old girl, on Saturday night, drowned in a cesspit.

The incident happened at Bamahu in the Wa municipality of the Upper West Region.

The cesspit was left open after the sewage was extracted earlier, according to reports.

An eyewitness told JoyNews that their attention was drawn to the victim’s mother who was crying when the child fell into the pit.

Following this, they sought help to help save her.

However, by the time they got a ladder to rescue the girl, it was too late.

The body of the girl whose name has been given as Maafaaza Abu was later retrieved from the cesspit but after confirmed dead at the Wa Municipal Hospital.

The deceased is the daughter of the hostel’s caretaker.

JoyNews’ Upper West regional correspondent, Rafiq Salam, reports that there are several cesspits dotted in the municipality which are left open.

“It is dangerous to the residents because there are other small girls and even if you are walking in the darkness we wouldn’t see,” a resident said.

The body has since been buried in accordance with Islamic customs.

Previous Ecuador blast ‘declaration of war’ by gangs
Next Schools under trees: Pupils of Apaaso DA Basic School near Kintampo appeal for help