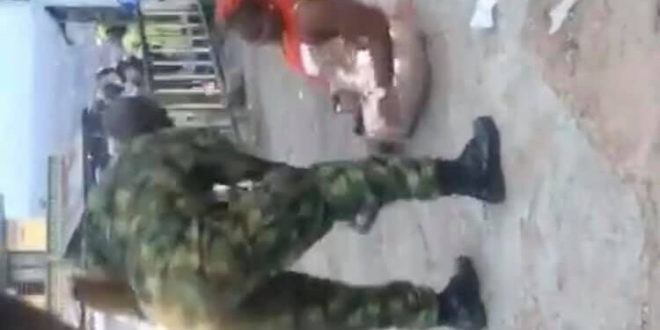 A Nigerian military man who was spotted in a video disciplining a young lady who didn’t dress decently when going out is said to have been arrested after the video went viral on social media.

Commissioner for Youths and Sports in Oyo State, Seun Fakorede via a Twit on his Twitter handle confirmed the arrest of the Soldier stating that he would be brought to justice for his actions.

In the video which went viral before his arrest, he could be seen along with his colleague soldiers who were spotted flogging and shaving-off the hairs of residents.

My ears are full with news of the unlawful activities of some Soldiers of the Nigerian Army, over the weekend. I have immediately reached out to the Commandant of the Operation Burst and I’ve been assured that the men involved in this distasteful operation have been arrested and taken to the barracks — they will be dealt with accordingly. This will not repeat itself again in Oyo State. Please, kindly go about your daily business and activities without fear. Thank you.

Previous VIDEO: Maame Yeboah Asiedu quits Multimedia , this why
Next Boy, 9, drowns after downpour in Koforidua