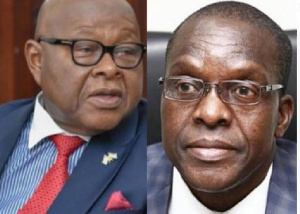 Mike Oquaye or Alban Bagbin: Who becomes Ghana’s next Speaker of Parliament?

Article 95 of the 1992 Constitution provides for the election of a Speaker from among MPs or persons qualified to be MPs.

This has been the practice since 1993 when the late Justice Daniel Francis Annan on January 7, 1993, was chosen as the first Speaker of Parliament after Ghana returned to constitutional rule following several military interventions.

Since then, the country has successfully had seven Speakers of Parliament and on January 7, 2021, either NDC’s Alban Bagbin or NPP’s Prof. Mike Oqauye would be given the nod to serve in the 3rd highest position of the land.

On Monday, January 4, 2021, the National Council of the New Patriotic Party nominated Professor Aaron Mike Oquaye as the party’s candidate for the Speaker position.

Prof Oquaye, when elected, might repeat the history of late Speaker of Parliament, D. F Annan who served two terms (1993 to 2001)

The two-time Member of Parliament for the Dome-Kwabenya constituency who assumed the position of Speaker in 2017 once served as Ghana’s High Commissioner to India from 2001 to 2004.

The National Executive Council of the National Democratic Congress also on January 6, motioned Alban Bagbin as the party’s candidate for the role.

Alban Bagbin, the Second Deputy Speaker for the 7th Parliament might also be the next NDC Speaker after Mr Edward Doe Adjaho who led the Sixth Parliament of the Fourth Republic (2013 to 2017).

Mr Bagbin is Ghana’s longest-serving legislator and outgoing Member of Parliament for Nadowli Kaleo in the Upper West Region.

Ghana was left with a near hung Parliament after the 2020 polls with the NPP and National Democratic Congress all having 137 seats each in Parliament.

Unlike the seventh Parliament where there was a clear Majority and Minority side of Parliament, the eighth has a slim majority since a lot of the sitting NPP Members lost their seats after the December 7 election.

In what was meant to be his last State of the Nation address, President Akufo-Addo said the seeming ‘gridlock’ in the next House calls for tolerance and new ways of conducting affairs in the chamber.

He said he anticipates a dramatic change in the mood of the 8th parliament throughout its entire life span.

“The next parliament is not going to be like this one that ends today. I do not suggest that the House might not be as busy but the sitting arrangement would certainly be different. The good people have spoken and given Parliament almost an equal strength on both sides of the house. We have no choice but to work with the consequences of the desires of the people. The House would have to be more accommodating of each other’s views and probably device new ways of conducting its affairs in the interest of the good governance of our people,” he stated.

Tags NEXT OF PARLIAMENT SPEAKER