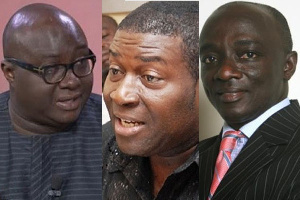 Son of Ghana’s Speaker of Parliament, Aaron Mike Ocquaye, has bemoaned the “Edidi Gya” phenomenon in the governing New Patriotic Party (NPP) where some people are only meant to work, while others who lazy about are quickly called and offered juicy government jobs when, the party wins power.

Mike Ocquaye Jr. could not understand how, he and others in the NPP, were made to work, but missed out on becoming ministers when the party won the 2016 elections, adding “I didn’t want to be an ambassador”.

He appears unhappy about being thrown out of the country to faraway India to become Ghana’s High Commissioner, because “I had a young family, I wanted to stay here”.

According to Mike Ocquaye Jnr., he and many others, including the former Member of Parliament (MP) for Okaikoi South, Nana Akomea, boss of Global Media Alliance (GMA) Edward Boateng, the late ex-General Secretary of the NPP, Kwadwo Owusu Afriyie, had wished to be appointed probably as ministers and worked hard for it, but these eluded them.

“I thought they will call us for appointment like they did when there was work…” Mike Ocquaye Jnr narrates how he, Akomea, Sir John, didn’t become ministers.

The former Minister of Employment and also Information, Nana Akomea, who from all indications was unhappy about his exclusion as a minister, forcibly went for the position of Managing Director (MD) of State Transport Company (STC).

The late ex-General Secretary, alias “Sir John”, waited for almost a year to be appointed the Executive Secretary of the Forestry Commission (FC).

Mike Ocquaye Jnr., alias “Gabo”, blamed their inability to grab ministerial appointments in the Akufo-Addo administration because they did not start lobbying early like the others.

Ghana’s envoy to India said that after the NPP won political power, they had anticipated that they will be called for an appointment, but the call never came.

He said after the election in 2016, he, in particular, was engulfed in preparation towards the inauguration of the President-elect, Nana Akufo-Addo, but unknown to him, many from all walks of life, had already started busily lobbying for appointments on his blindside.

“This is a conundrum very surpassing to myself also because I didn’t want to be an ambassador also. In fact, there were a lot of things that went under the water and I was very surprised when I was named as ambassador.

People like myself, Edward Boating, Nana Akomea, Sir John, who were very busy with the inauguration of the President and we thought that, just like they call you when there is work, they will call us when there is post. But it’s interesting that things went ahead”, he said.

He said, even though he had made his preference known ahead, before he could start his lobbying, the spaces were already field to his shock.

Mike Ocquaye, who has been contesting the Dome-Kwabenya parliamentary Constituency seat for some time now without success said, he had been under the wrong impression that just like the party calls when there is work to be done, they had anticipated that they would be called when it came to the appointment.

Regrettably, that was not the case, he later realized, the former Deputy Communication Director of the NPP said.

Speaking on Good Morning Ghana on Metro television recently, Mr Ocquaye, said he objected to his appointment to India because of the fact that he had a young family and so wanted to stay behind and raise them, but that was not to be.

“I had a young family, I wanted to stay here, I had made my preference known, but I think some of us we didn’t start lobbying early, as they say”, he said.

Mike, said even though he initially rejected the appointment to India, a position his father once held under ex-President John Kufuor, he later agreed to go after series of consultations.

He said, he had been under the wrong impression that, ambassadors are older people, who have served in various portfolios but upon arriving in India, he noticed he was wrong having come to the realization that there were a lot more people like him who took that position when they were even far younger than him.

He subsequently, changed his perception.

“To be honest, it was something I didn’t want from the beginning but after few consultations with some of them (I am a spiritual person) spiritual some of the actual, I decided that it will be a big opportunity to serve the nation.

But then when I got to India, I realized that thinking that ambassadorial {position} was for former MPs, was for former ministers, was a misnomer because the dean of all the ambassadors was actually just a year older than me. He had been an ambassador for 13 years can you imagine?

An ambassador from Dominica, he was not a career diplomat he was a former Deputy Minister for Tourism for Dominica but he had been an ambassador for 13 years and I went and met him he was only 46 or 47”.

He went to advice future Ghanaian governments to look at criteria for appointing ambassadors or high commissioners saying if the person qualifies in all aspects, he or she should be given the opportunity to her the country.

“So it changed my perspective of how it was and many of the countries especially those from Europe and so on.

You had ambassadors in their early 40s so I think that, this is something that Ghana, we also have to look at. As long as the person has the right profile, the right skill, the right temperament to be able to represent the country and so on, it is something we need to look at”.

Previous The Origin, Meaning And History Of Otumfuo Hia Stool
Next 4 journalists contest for parliamentary seats in Greater Accra Region