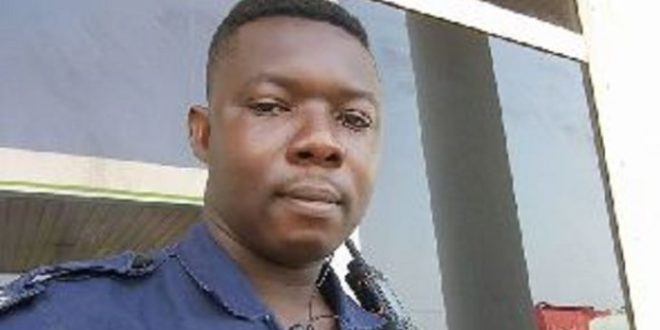 The police service will not be pursuing any further criminal action against Lance Corporal Fredrick Amanor, the police officer who assaulted a lady at a Midland Savings and Loans branch in Accra.

The Director-General of Public Affairs of the Ghana Police Service, ACP David Eklu confirmed this in an interview on the Citi Breakfast Show on Monday.

ACP Eklu said: “internal disciplinary processes” are still ongoing after the assault which occurred in July 2018 but added that any individual aggrieved by the police’s handling of the case can head to court.

“If somebody is still not satisfied, he can go to court and look at it or revisit again but we have done what we are supposed to do be done as per the law.”

Fredrick Amanor was arrested and arraigned for assaulting a customer of Midlands Savings and Loans Company in 2018.

But the widely condemned act of police brutality did not result in any conviction in court because the case was discharged due to a purported lack of interest in the trial by the victim, Patience Osafo.

He is now back at post, according to ACP Eklu, who added that there was no cause for alarm.

“There are certain duties that the police officer will not perform,” he told Bernard Avle on the Citi Breakfast Show.

“The police officer [Fredrick Amanor] is working now. He is going through internal disciplinary processes. It involves counselling, supervision and all that so what I am saying is that we do not endorse that kind of action but at the end of the day we would have all hoped that the law would have been applied but it ended at a certain point.”

Responding to concerns about the handling of Fredrick Amanor’s case, ACP Eklu said: “what it tells me is that there is the need for more public engagement on some of these issues.”

“We have done it even to the extent that people said we were even too harsh on the police officer because he was immediately arrested, placed in custody, interdicted and all that.”

Counsel for Patience Osafo disputed claims that his client was not interested in continuing with the case.

This was contrary to a court judgement dismissing the case, citing the lack of interest by the victim who is said to have failed to appear before the court on a number of occasions to testify.

“There were proper charges that were supposed to have been proffered against the gentlemen, but that had not been made. The fact we know is that he was to be charged with more than a mere assault, but because it was the police doing the case against their colleague, they obviously looked the other way and did not look at the felony of causing harm with the potential of ten years of jail. They could have added the charge of exposing the child to danger as shown in the video. They didn’t do all of these,” he added.

Lance Corporal Amanor assaulted Patience Osafo in July 2018 when she was trying to withdraw her savings of GHc 270.00 after office hours due to frustrations from the bank.

The police officer got physical after Patience Osafo refused to leave the banking hall with her grandchild because her money had not been given to her.

The police officer was seen holding onto the woman and hitting her multiple times with an umbrella, as she tried to push her out of the banking hall.

He also attempted to violently drag her out of the building as she held the baby in her arms.

The incident was captured on video and went viral on social media sparking public outrage and drawing condemnation from Amnesty International, the Ghana Bar Association, the Ministry for Gender, Children and Social Protection, and a number of civil society organizations.